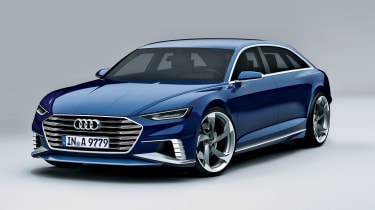 Audi will offer another insight into the design of its future models with the Prologue Avant concept at the Geneva show next month. Revealed here for the first time in a series of official computer renderings and sketches, it builds on the well-received two-door Prologue concept car at the LA Motor Show last November.

Just as the Prologue concept previewed a possible future rival to the Mercedes S-Class Coupe (likely to be badged A9) as well as replacements for the A6, A7 and A8, the Prologue Avant shows how a more practical version of those cars could look, and judging by the low, sloping roofline Audi could have a Mercedes CLS Shooting Brake rival in the pipeline. 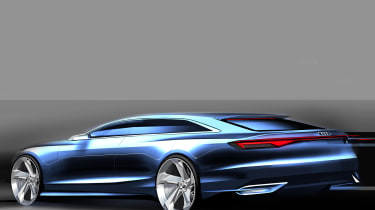 The profile sketch in particular show just how aggressive Audi plans to make its next-generation Avants, ensuring more practical family cars aren’t the styling compromise they once were. This new, more aggressive look is all part of Audi’s new head of design, Marc Lichte’s vision for the booming brand.

Technical details are scarce at this point, but a powertrain similar to the Prologue concept is expected. That featured a 4.0-litre twin-turbo V8 producing 597bhp and 750Nm of torque – enough to accelerate from 0-62mph in 3.7 seconds. However, a sophisticated brake energy recovery system meant CO2 emissions were a mere 199g/km.

The Prologue Avant looks to be even larger than the Prologue, which measured in at more than five metres long and 1.95m wide. Huge 22-inch alloys are crammed into the Avant’s arches, while the front end features a more squashed hexagonal grille, LED Matrix headlights and striking LED lights either side of the huge front air intakes. 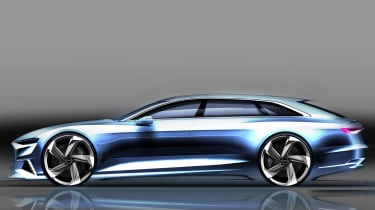 As for the interior, the sketch gives little away, but expect an exercise in minimalism with multiple touch screen displays replacing practically all the switchgear – a vision of how technology will become even more dominant in future Audi interiors.

We’ll bring you more details and a full photo gallery of Audi’s stunning Prologue Avant concept when it debuts in Geneva.