Audi's prologue concept, revealed in LA, hints at a two-door rival for the S-Class Coupe and future design direction for A6, A7 and A8 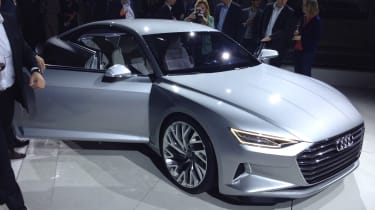 The Audi prologue show car has been revealed at the Los Angeles Motor Show, and hints at a luxurious two-door rival for the new Mercedes S-Class Coupe.

It also shows a revised design direction for the German brand, and points towards the next-generation A6, A7 and A8, as set out by newly appointed head of design, Marc Lichte. Described as a “signature car for Audi”, the prologue show car could also eventually manifest itself as the new Audi A9.

The two-door coupe features a 4.0-litre TFSI turbocharged petrol engine, tuned to produce 597bhp. There’s 750Nm of torque, helping it race from 0-62mph in just 3.7 seconds. That means if it was to make production, it could out-accelerate the flagship £183,000 Mercedes S 65 AMG Coupe, which takes a comparatively lethargic 4.1 seconds for the same benchmark sprint. 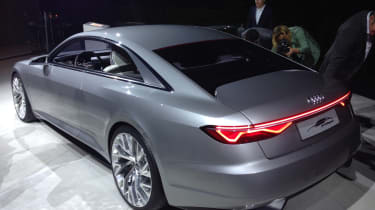 However, despite the impressive performance, it’ll emit just 199g/km of CO2, thanks to a 48-volt ‘mild hybrid’ system that captures wasted energy under braking. The prologue also features an eight-speed automatic gearbox mated to Audi’s famous quattro four-wheel drive. Air suspension and a four-wheel steering system ensures the show car offers a good blend of comfort and responsive handling.

The Audi prologue is shorter and lower than the current A8 saloon, but that’s not to say it’s a small car. It’s still more than five metres long and 1.95 metres wide. The huge front grille gives it an imposing stance, and gives us a good idea of what all future Audis will look like.

The sleek headlights feature futuristic Matrix laser technology, which Audi says “illuminates the entire street in high resolution,” below which a pair of contoured air intakes have been incorporated into the sharp bumper design.

From the side, the 22-inch ten-spoke alloys dominate the wheel arches, while the flared shoulders give it a sleek and flowing silhouette. The bold body creases running from front to rear give the impression of a fast, luxurious GT car that could rival the likes of the Aston Martin DB9. 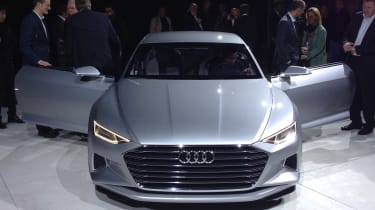 Aluminium and high-strength steel have been used extensively in the construction of the Audi prologue show car, coated in a pearl effect paint, which Audi says gives it a “warm and elegant appearance."

Inside the spacious and futuristic interior shows an exciting new direction for Audi. Not exactly an area that needed work, Audi has moved the game up a notch, by combining the minimalist design and virtual cockpit from the new TT with cutting-edge technology and first-rate materials.

The dashboard integrates three touch displays, allowing the driver to control everything from lighting to multimedia and the car’s safety assistance systems on one either side of the steering wheel. 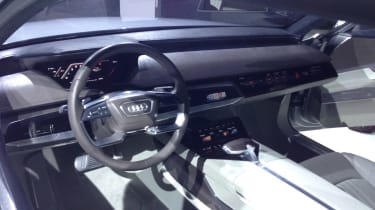 The interface is said to visually adapt to the specific driving style, while an innovative and intelligent software system will identify and communicate with the driver and passengers via their smartphones. The clever tech can adjust the seats and climate control settings according to their preferences and also make changes to the route plan and recommendations for music throughout their journey.

What do you think of this ultra-luxurious concept car? Let us know in the comments below...