We jump aboard the Audi AI:ME concept on the eve of the Consumer Electronics Show in Las Vegas 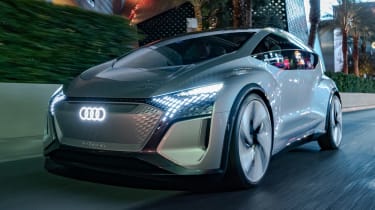 The Audi AI:ME’s interior packaging shows again how roomy smaller cars will be able to be without the internal combustion engine up front. But more than that, it showcases how car companies are keen - desperate, even - to play their part in what goes on in the vehicle when we no longer have to drive it ourselves. Will it all take off? It’s hard to see everyone sticking on VR headsets on a regular basis but on a more practical level, the cabin of the AI:ME does feel like it would be a different, pleasing place to spend time while the car was tackling the morning commute. And that, Audi hopes, is what will give its products an edge in an era when autonomy has become commonplace.

Audi has been trotting out visionary concepts alongside its considerable raft of new production cars over the past few years. We’ve seen themed creations like the Aicon and the PB18 e-tron - and last year the firm scored one of the hits of the Shanghai Motor Show with its customer environment-focused AI:ME. Now Auto Express has been among the first to jump aboard the future city car concept to see how it works in practice.

The AI:ME (Audi people pronounce it ‘Amy’) is, in effect, a sandbox that allows the German brand’s engineers to play around with how we can interact with a vehicle when we’re no longer charged with the responsibility of driving it all the time.

Truth is, car companies are mildly concerned that once the ‘feel’ of driving is removed and near-silent electric motors power pretty much everything, there’ll be precious little to differentiate one brand’s products from those of its rivals. The importance of dynamics is being very slowly eroded. So how is the experience in an Audi of 10 years’ time to feel any different to that of a Mercedes or a BMW? 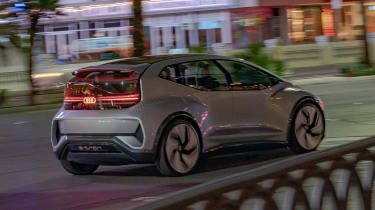 It is immediately obvious as we arrive at our test venue that dynamic assessment isn’t going to be part of this ride. The AI:ME is a concept through and through, so we’re going to tour an empty rooftop car park in Las Vegas (on the eve of the Consumer Electronics Show) at walking pace. But we should also point out while Audi engineers insist that the AI:ME is not based on a production car platform, its wheelbase is identical to that of the forthcoming Q4 e-tron, which uses the VW Group’s pure-electric MEB architecture.

In any case, the car itself is 4.3 metres long, 1.9 metres wide and 1.52 metres tall. So it’s shorter than most family hatchbacks but a bit wider - and like many electric cars, a slightly raised floor (to allow the battery back to be installed) means that its roofline is a little taller. Audi’s designers have tried to disguise the substantial flanks, though, by putting a crease into the side windows - a line that runs the whole way around the vehicle, in fact.

There’s the short bonnet - another EV trait and one that’s going to be common on all MEB vehicles, it seems - and little ripples in the bodywork around the front bumper and over the tops of what look like substantial wheelarch extensions. The AI:ME looks surprisingly squat and purposeful for what is ostensibly a city car concept, although the 23-inch wheels do their bit by filling out the arches.

The doors glide open, revealing an entry space that does without a B-pillar for maximum ease of access. It’s immediately clear that the AI:ME is designed to be a shared space and one that tries to bridge the gap between a car interior and the front room of your house. The materials used are pilfered from home furnishings - there’s velvet on the door linings, a slab of walnut above the steering wheel and slabs of Corian, a hard surface more commonly found on kitchen counter tops.

There are also more homely touches, such as the soundbar that runs right around the base of the windscreen (a sign that users will want to enjoy audio more when they don’t have to worry about listening to what’s going on outside the vehicle) and small plants draped around the dashboard and hanging from the rear roof lining.

The front seats are quite sofa-like - wider and squidgier than you’d usually find on a car. There’s a huge amount of space in front of them, too, where Audi’s designers have cut away the dash to almost nothing. 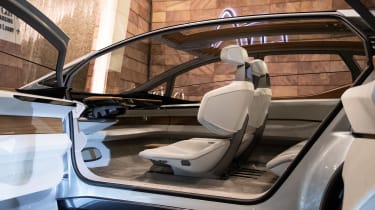 The reason the AI:ME is in Las Vegas is to show off a few new tweaks to its cabin - the results, if you will, of further technological developments and fresh thinking from the engineers. This is designed to be a car with Level Four autonomy, after all, so AI:ME users would, in theory, have the capability to take their hands off the wheel and eyes off the road for specified stretches of any given journey.

Sure enough, the concept’s steering wheel folds forwards and then slides back beneath the slab of walnut that’s sited where an instrument binnacle would normally be. Then the piece of wood slides forwards as well, giving the driver additional space to store items or an area that could be used as a desk.

The most significant tech inside the AI:ME is digital, though. It’s based on a new curved 55-inch OLED display that features built-in eye tracking to allow users to interact with the car’s systems without using a touchpad or even voice commands. Audi’s demonstration flashes up a choice of meals on the display, to simulate the AI:ME approaching a restaurant that it knows its user likes to use. 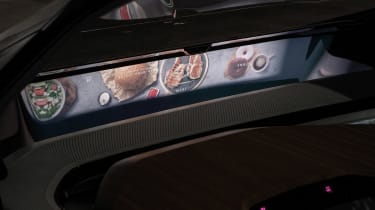 The winter sun in Vegas is low and strong, making the reflective display a little hard to see at first, but the infrared-based tracking isn’t easily fooled and it’s possible to flick between the options just by adjusting your line of gaze. It’s easy to perceive how this tech could combine with voice commands to allow you to choose, then say, “That’s the one.”

Audi is also working on how to spirit car users away from their journey - and it showcases this by getting us to put on VR headsets. The AI:ME then completes another lap of its Vegas car park, while we watch a ‘journey’ over some spectacular scenery from the Guilin province in China.

The system adjusts the progress through the spectacular mountain landscape to reflect the car’s movement - so when it turns right to avoid a car park bollard, the footage does the same. The potential would exist, Audi’s boffins say, for the car to even playback different versions of the surroundings that the car is really passing through - to show, for example, a digitally created historical version of the region.