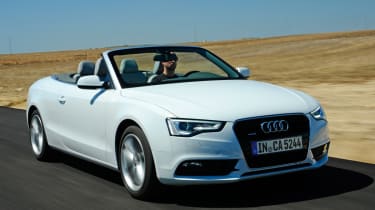 The understated elegance of the Audi A5 Cabriolet is the first thing that catches the eye with this four-seat drop top. Following the lines of the A5 Coupe, it blends a sharp design with decent performance and manageable running costs. Its fabric roof adds a retro twist to its appearance too, and as it is takes up less space to stow away, it means the A5 has a bigger boot than its arch-rival, the BMW 3 Series Convertible. And there's no disadvantage in having a fabric roof - the A5 Cabriolet is nearly as quiet as the A5 Coupe at motorway speeds.

The A5 Cabriolet offers a wide range of diesel and petrol engines. Even the small 1.8-litre turbo engine delivers a punchy performance, but the 2.0-litre turbo or 3.0-litre V6 choices will satisfy drivers who want real power. The entry-level diesel is a flexible 2.0-litre, while 201bhp and 242bhp 3.0-litre units are also available. Manual and automatic transmissions are both available, as is front and four-wheel drive. When cornering, the A5 gives a reassuring amount of grip, but its steering is slightly vague and it's hard to get a feel of what the front wheels are doing. The ride is also uncomfortably hard on top-spec S line models, especially when you choose optional large-diameter alloys.

The Audi A5 Cabriolet is more affordable than its main rival, the BMW 3 Series Convertible and it holds its price well come resale. The 2.0 TDI diesel engine is the best choice if low running costs are a priority, thanks to its 57.6mpg economy and low enough emissions to fall into Road Tax bandD. The 1.8 and 2.0 TFSI turbo petrol engines offer good economy too, but the bigger 3.0 TFSI V6 petrol engine is thirsty and will shed its value on the second hand market.

From the outside, the Audi A5 Cabriolet looks sharp, with a simple shape that's dominated by a large Audi grille. The LED daytime running lights are now a trademark of the brand. Inside, the good quality materials, stylish but clever design and high standard of construction is what we have come to expect from Audi. The S line package adds a further touch of sportiness to the already luxurious cabin, including S line-embossed leather sports seats, S line sill plates, a three-spoke S line design steering wheel trimmed in black leather and matt-brushed aluminium inlays.

Unlike the folding hard-top-equipped 3 Series Convertible and Lexus IS C, Audi has stuck with a cloth roof for its A5 Cabriolet. An acoustic version with extra insulation is optional on SE models and standard on S line cars, and it compares favourably with its hard-topped rival. Even if it starts to rain when you're on the move, you can raise or lower the fabric hood at speeds up to 30mph. The boot is genuinely large and could rival a small saloon's.

In terms of safety, every A5 Cabriolet comes with stability control, and front and side airbags that cover the head and chest. A protection mechanism deploys rollbars behind the rear seats to protect passengers in case of the car turning over. Added safety options can be purchased too, such as adaptive cruise control and blind-spot and lane-assist systems.