The Audi A5 Black Edition is a smarter, better equipped version of the standard car thanks to extra interior and body kit 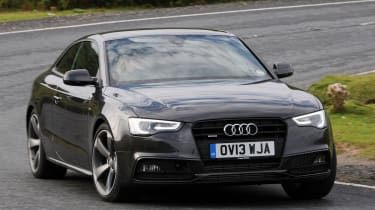 The Audi A5 Black Edition is a limited edition, high-spec version of the manufacturer's mid-sized A5 coupe.

The Audi A5 was originally launched in 2007 and received a facelift in 2011. Its trapezoidal grille, Audi family face and sharp lines make it a stylish alternative to the BMW 4 Series and Mercedes C-Class Coupe, and it's a bit more practical than its rivals as well.

The Audi A5 Black edition is based on the S Line model, so it keeps the leather seats and luxury trimmings, but it gets a few aesthetic changes and extra kit to distinguish it. It gets large 19-inch alloy wheels and a styling package which includes a matt black number plate holder, matt black fog light surrounds, black door handles, plus a polished black radiator grille frame.

This means, of course, it also comes with a high asking price - around £31,000 for the smallest engine in the Audi A5 Black Edition range, the 1.8-litre TFSI.

On the inside, the Audi A5 Black Edition is fitted with smart piano black inlays, a flat-bottomed steering wheel and a powerful Bang and Olufsen sound system.

Audi A5 Black Edition buyers can choose between the three-door coupe or the five-door Sportback. There are also four engines - two diesel and two petrol - on offer, and all come with the stop-start technology that's fitted as standard across the Audi A5 range.

The smallest engine in the Audi A5 Black Edition range is a 1.8-litre petrol TFSI engine which can either be specced with a six-speed manual gearbox, or the automatic Multitronic transmission. When fitted with the six-speed manual box, the Audi A5 Black Edition returns 49.6mpg and emits 134g/km of CO2. The Multitronic system doesn't affect fuel economy too much as it drops slightly to 48.7mpg and CO2 emissions remain the same.

The other petrol engine in the Audi A5 Black Edition range is a 2.0-litre TFSI petrol which is mated to Audi's quattro four-wheel drive system. The choice of gearboxes is the same as on the 1.8-litre car, but emissions slightly worsen. When fitted with the manual gearbox, this bigger version emits 152g/km of CO2, and returns 42.8mpg. The automatic gearbox sees emissions rise slightly to 155g/km, and fuel economy drops to 42.2mpg. 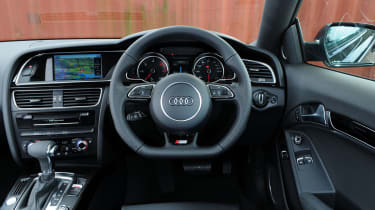 The A5 Black Edition also comes with a range of impressive diesel engines. The smallest engine is a 2.0 TDI diesel which is mated to a front-wheel drive or four-wheel drive Audi quattro drivetrain.

Both units are available with Audi's six-speed manual gearbox, while those who prefer automatics get a choice of either multitronic or S tronic automatic gearboxes. The Audi A5 Black Edition with the 2.0-litre diesel engine and manual box returns 61.4mpg with emissions of 123g/km. With the multitronic gearbox fitted, this drops slight to 60.1mpg and 123g/km. The 2.0-litre TDI quattro S tronic returns 53.3mpg, plus CO2 emissions of 139g/km.

The Audi A5 Black Edition also comes with a 3.0-litre TDI diesel engine with either a 201 or 241bhp output - the latter is the most powerful in the range and comes with the Audi quattro system. Both engines are again fitted with the multitronic or S tronic gearbox, with the former returning 57.6mpg and CO2 emissions of 129g/km. The more powerful version, however, does 49.6mpg with 149g/km of CO2.

Despite its impressive economy figures, like the rest of the Audi A5 range, the Black Edition's driving experience isn't up there with its main rival, the BMW 4 Series.

The Audi A5 doesn't seem as sharp as the BMW and its steering feedback feels pretty artificial. However, the four-wheel drive quattro models have loads of grip and even the basic front-wheel drive models have excellent body control.

It's worth remembering though, that the Audi A5 Black Edition comes with huge 19-inch alloy wheels and a stiffer suspension. While they may look great, when combined with the stiffer springs, the ride is pretty jarring and you'll notice that bumps and potholes send shudders through the steering wheel. If, however, you do value your spine, you'll be pleased to know that Audi offers a softer suspension as a no-cost extra.

The Audi A5 finished 71st in our 2014 Driver Power survey overall, with drivers raising concerns surrounding ride comfort and ease of driving, but praising it on build quality and performance.

The A5 hasn't yet been crash tested but as it's based on the Audi A4, which received the full five stars from Euro NCAP, we would expect a solid score. Standard safety features on the car include passenger and curtain airbags, as well as stability control, parking sensors, and seatbelt pre-tensioners.