The new Audi A6 Avant estate has been revealed, joining the saloon in the executive car’s line-up

The latest-generation Audi A6 saloon hasn’t reached dealers yet, but the German brand has wasted little time in revealing the Avant estate version.

A rival for the BMW 5 Series Touring and Mercedes E-Class Estate, the latest A6 Avant gets the same evolution in styling as its four-door sibling.

The car is slightly larger than its predecessor – 10mm longer, 20mm wider and 6mm taller – but its front and rear overhangs are both reduced, thanks to an extended wheelbase. That should improve cabin space, particularly for those sitting in the rear seats. 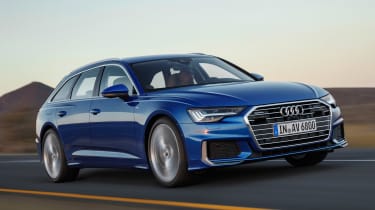 The rest of the shape echoes the saloon’s styling. At the front, there’s a 3D effect to the headlights and a ‘strong’ grille that makes a point of showing the car’s laser and distance sensors.

Towards the rear, there are sizeable D-pillars, a small roof spoiler and a chrome strip that runs across the back. As usual, S line models will get different bumpers, with winglets at the front and a diffuser at the rear.

The A6 Avant’s load bay remains the same as in the car it replaces: 565 litres as standard, or 1,680 litres with the 40:20:40-split rear seats folded. The more rakish tailgate (which Audi says is a design nod to the original 100 Avant) may affect the car’s ability to swallow larger items, but it still looks like it’ll be more than big enough for most family needs.

Inside, there’s even less to split the Avant from the saloon. The dashboard is dominated by Audi’s latest dual-screen infotainment, complete with haptic feedback that gives you a fingertip sensation to confirm that an on-screen button as been ‘pressed’.

One of the system’s neatest functions is an advanced parking camera set-up that allows you to see what’s going on around the vehicle – as if it were being filmed from a drone. Audi’s 12.3-inch digital dials also feature, while a head-up display will be offered. 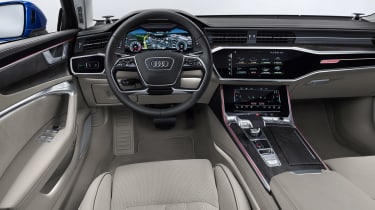 The engine line-up will mirror that of the saloon, with petrol or diesel V6s, all featuring 48-volt mild-hybrid tech and four-wheel drive. The 50 TDI will have a 282bhp 3.0-litre diesel, plus Audi UK is considering offering a 228bhp version of the same motor. The V6 petrol 55 TFSI will deliver 335bhp. A 201bhp 2.0 TDI four-cylinder is also in the pipeline – although the UK is unlikely to see this model until the end of the year – and a high-performance RS 6 is coming. All A6 Avants will have auto transmissions.

There will be four suspension set-ups: steel springs, steel springs with adaptive shock absorbers, sports suspension and full air suspension. A sports diff and dynamic all-wheel steering will also be available, with the latter helping reduce the turning circle by up to a metre.

Read more about the new Audi A6 saloon right here... 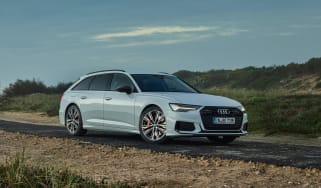