Audi's all-new A6 is quicker, more agile and better quality than ever before, but is that enough for it to topple the 5-Series? Read our review to find out 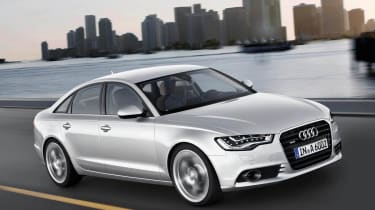 There’s much to like about a car that distils the luxury, quality and driving experience of a flagship model into a smaller package. And while this new A6 range does cost more – the old line-up kicked off at nearly £2,000 less – you do get more for your money, including satellite navigation for instance. Executive buyers will also love the fact that thanks to lightweight materials this A6 is faster and better to drive but much more efficient than before. It’s a shame that it doesn’t have more personality – we’d like it to stand on its own more rather being a shrunken A8 – but this is still an impressive machine.

Everyone has an arch rival – and for the Audi A6, there’s no greater nemesis than the BMW 5-Series. In the UK, it’s never got the better of its opponent, though. It’s never looked as good, never driven as well, never had the same want-it factor. But could that all change with this all-new model?
Made from more aluminium and high-tech steels than ever, it’s lighter than its rivals, so it’s faster yet more efficient. And with a chassis from the sporty A7, it should be great fun too.  Prices start from £30,145 for the entry-level 2.0TDI and stretch to the £41,620 for the 3.0TFSI quattro with first deliveries in March.

Video: watch CarBuyer's video review of the Audi A6
[[{"type":"media","view_mode":"content_narrow","fid":"69309","attributes":{"alt":"","class":"media-image"}}]]
It’s certainly a lot better looking than its predecessor – even if it does look like a slightly smaller A8. Its aerodynamic shape boasts some sharp surfacing and a lovely curved roofline, while the neat taillights and that bold grille with its smart LED daytime running lights really finish things off.
Inside, the baby A8 feel continues. The dashboard sweeps classily across the facia, the centre console is logically laid out and all the materials, from metals to plastics to leathers, are of a really high standard.
The gadget count is high. In standard SE trim, you get satnav with a 6.5-inch digital display and voice control, Bluetooth, climate control and a 180 watt sound system with 10 loudspeakers. Not to mention 17-inch alloys Audi’s clever Drive Select system – which allows you to tweak the responses of the throttle, gearbox and steering – as well as fuel-saving tech such as stop-start.
S line trim adds posher leather, electric sports seats and a subtle bodykit with 18-inch alloys. Predictably, there are plenty of tempting options. You can tick the box for night vision, a head-up display, a voice and touch operated satnav system (just draw the individual letters of your destination on a pad and keep your eyes on the road), as well as a Bang and Olufsen stereo and a TV.
But what about space? Well, despite being shorter than the old car, the new A6 is a little wider and as a result, there’s more legroom and headroom. In the back there’s space for two six-foot tall adults while the 530-litre boot puts the A6 between the 5-Series and the Mercedes E-Class.
Traditionally, the driving experience has always done the same – and there’s no change with this new version. The A6 isn’t quite as comfy as an E-Class or quite as sporty as a 5-Series. It falls between the two, but it still strikes a neat balance.
Lightweight plays a part. All that aluminium helps keep our top-spec 3.0TDI quattro S line model to 1,720kg – not as featherweight as the 1575kg entry-level 2.0-litre diesel but the same as a BMW 530d despite having four-wheel drive.
You can feel that in the way the door swings open easily – but on the move this feels every inch the planted yet fast saloon. The 242bhp 3.0-litre TDI V6 provides sports car performance with zero to 62mph in seven seconds and thanks to 500Nm of torque and a slick-shifting seven-speed S tronic automatic gearbox, overtaking is ridiculously easy. It’s extremely efficient too – returning almost 50mpg and emitting just 158g/km of CO2 – and remarkably quiet.
It doesn’t feel quite as good an all-rounder as the 5-Series though. No matter which Drive Select mode you choose, the steering feels completely removed from the action. Our S line model had 20m lower sports suspension and together with larger wheels, that makes the ride very firm indeed.
But it’s still magnificent at covering long distances with ease. And the ace up the Audi’s sleeve is four-wheel drive. Featuring the RS5’s crown-gear centre differential and torque vectoring, there’s always plenty of traction and given the UK’s recent harsh winters will be reason enough for many buyers to make a purchase. Particularly when the Avant estate arrives later this year.
Has the A6 finally thrown a sucker punch at the 5-Series? Well, it’s genuinely good looking, extremely efficient, spacious and good to drive. It’s also remarkably well equipped and well made. If driver involvement is a priority then the 5-Series still takes it. But what Audi has done is build a slightly smaller A8. And that’s a tempting prospect.
BMW 530d SE Auto
At £40,300, the 5-Series might well be cheaper than the A6 but it doesn’t come with an M Sport bodykit – the closest thing to the Audi’s striking S line trim – or satellite navigation. The two are matched on performance and economy, although the BMW is still the better of the two to drive. But, the gap is much narrower than before.