The all-new Audi A8 has arrived, but can it jump above the Mercedes S-Class and BMW 7 Series to the top of the luxury car class? 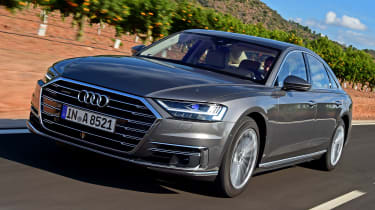 For ultimate comfort, luxury and opulence, the new Audi A8 can’t quite match the recently revised Mercedes S-Class. But there’s no doubt Audi’s particular blend of understated and in-car tech make a strong case for the latest luxury limousine. When the Level 3 piloted driving technology arrives, its appeal could grow further, too.

The luxury saloon market has always been a breeding ground for the kind of technology we come to see on more conventional cars in the years to come. The latest Audi A8 is as important for the glimpse it gives us into the future, as it is as a luxury driving experience.

That’s not to say Audi hasn’t changed the A8’s fundamentals in its latest incarnation, though. It’s more powerful, more economical and bigger, too. The standard car is 37mm longer than before (now 5,172mm), with 6mm added to the wheelbase.

Those changes are difficult to spot from the outside, and true to form, Audi has applied an evolutionary approach to the A8’s styling. It’s handsome and understated but stops short of being visually intriguing. There are a few unique details however, from the OLED band spanning the rear end (and its fancy lighting display when you unlock the car at night) and matrix LED headlights, to subtle creases over the wheel arches as a hint to Audi’s continued use of Quattro all-wheel drive. 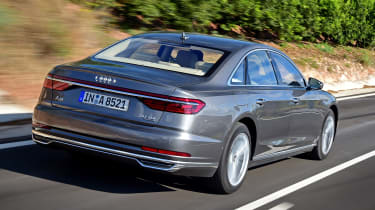 As ever there’s a lengthier long-wheelbase version, too, which also grows by 37mm. At just over 5.3m-long, the LWB car offers 3,128mm between the axles. It’s helped liberate extra room in the cabin, which has also seen significant changes to modernise it in the face of competition from the latest Mercedes S-Class and BMW 7 Series.

Aside from slick new architecture that gives the dashboard distinct horizontal bands, and seats that are as well-shaped and comfortable over long distances as you’d hope for from a luxury saloon (including - and perhaps especially - those in the rear) the most notable additions are those of Audi’s Virtual Cockpit display ahead of the driver. There’s a pair of touchscreens on the centre console as well, comprising a 10.1-inch upper screen and 8.6-inch lower screen.

It’s also one of the best touchscreen systems on the market. While longer exposure might unearth niggles, during our first drive the system was entirely intuitive to use, with large virtual buttons that give haptic feedback to let you know they’ve responded. It also benefits from smartphone-style pinch and swipe functions for the navigation and media. 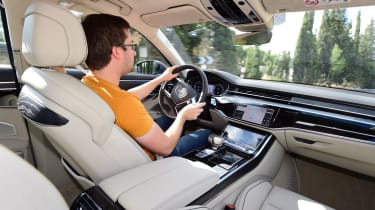 The lower screen can also be used to write on when searching for navigation destinations, replacing Audi’s old circular MMI controller touchpad - and seems able to decipher some fairly shoddy handwriting. Best of all, every function you’re likely to use on the move is easy to access, and quick enough to find at a glance, allowing you to keep your eyes on the road for longer.

The rear cabin is, in many ways, even more enticing than the front. Long-wheelbase cars offer obscene amounts of legroom but even the standard versions are spacious.

The A8 L also offers some standard kit optional on regular models, including sunblinds for the rear side windows and rear screen, and a tablet-like remote for activating the seat heater and massage functions. This screen can also adjust the ventilation and, as a bonus, allow passengers to change the colour of the interior mood lighting. 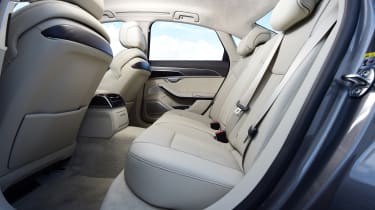 If there’s one thing rear seat passengers may miss, it’s the outright comfort of their counterparts in an S-Class, which feels just a little more sumptuous and ensconces you with softer, more lavish materials.

From the driver’s seat, the A8 continues to impress. UK buyers will initially have a choice of 3.0 TDI diesel and 3.0 TFSI petrol engines, badged A8 50 TDI and A8 55 TFSI under Audi’s confusing new naming system. The former develops 282bhp (a nine per cent increase on the old car) with 600Nm of torque, while the latter makes 335bhp and 500Nm.

But both models are fighting their extra weight. Despite the basic structure of the new A8 being lighter than its predecessor thanks to a mix of aluminium, high strength steels, magnesium and carbonfibre, the car is up to 95kg heavier than before. Performance and fuel economy remain strong, however; in 50 TDI form, the A8 can achieve up to 50.4mpg – though we saw a best of around 35mpg on our drive.

Thankfully, both versions are incredibly refined; the petrol particularly so. It develops little more than a muffled growl at high revs and, like the diesel, is almost inaudible at a cruise. This is particularly true when the 48-volt mild hybrid system shuts down the engine while coasting at high speeds. Both have more than enough performance for strong forward momentum, taking no longer than 5.9 seconds to cover the 0-62mph dash. 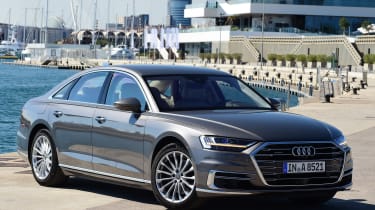 Thanks to four-wheel steering, which turns the rear wheels in the opposite direction to the fronts at lower speeds for agility, the A8 drives more like the smaller A4 around town. When you’re moving a bit quicker, the substantial weight (or its significant width) come into play, but thankfully the brakes are more than up to dealing with the A8’s bulk. They manage to haul the car down repeatedly with no sign of fade.

The cabin is hushed too, with just a rustle of wind noise from the mirrors at speed, and while the ride quality has just a hint of firmness that you won’t find in an S-class, the trade-off is impressive body control when the road gets twisty. The steering is accurate and well-weighted enough to place the car accurately, whether cruising down a motorway or tackling tight corners.

We’ll have to wait a little longer to test some of Audi’s Level 3 autonomous functions however, with systems like traffic jam pilot, parking pilot and garage pilot being rolled out via updates during 2018.