We say farewell to our fabulously practical camera car that shone as an unlikely track star, too 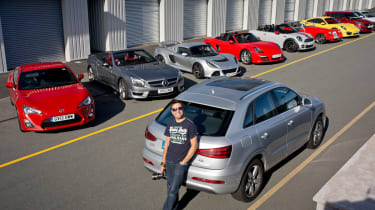 Confronted with a choice from 10 of the best performance cars on sale in 2012 or a day behind the wheel of my Audi Q3, there’s only one model I’d go for. While the Porsche Boxster or Toyota GT 86 can make you feel like a hero, this isn’t a priority that I’m looking for in a daily driver. In previous reports, I’ve related how I have been hugely impressed with our Q3’s all-round abilities – and on its final big job for me, it once again proved its worth as a camera car.

Our annual Performance Car of the Year test is held at Anglesey Circuit in north Wales, and it’s always a great indication of a vehicle’s ability. However, while our performance machines were expected to shine on the track, it was the Q3’s talents on the cross-country journey to Anglesey that were a highlight for me.

There are two main routes from my Essex base: the first is a more scenic trip through Snowdonia along the A5, which is a great drive with twisty roads and some picturesque photographic locations along the way. The second is a much less interesting motorway journey; it’s only after you pass Conwy that you start to get some great views.

Unfortunately, on this occasion time wasn’t on my side, so I had to plump for the latter route. But as I’ve mentioned before, the Audi is more than capable on motorways, and the 2.0-litre TDI diesel engine has simply got better with age. Racking up more than 26,000 miles in 11 months will soon highlight any flaws in a car, yet the Audi feels more responsive than ever – and I’m still amazed at how quiet the cabin is.

This meant the drive to Wales was painless and comfortable, while the built-in music hard drive that comes with the £690 optional Bose stereo helped the hours fly by. Throw in the intuitive control wheel for the MMI system, and it’s easy to shuffle through your downloaded albums.

What’s more, if you’re using the satellite navigation, you can change tracks using the multifunction steering wheel and the display set between the dials, saving you the effort of switching between different displays on the colour centre console screen. The relaxing journey meant I arrived at Anglesey fresh and ready for two days of photography. And once at the circuit, the Q3 became a great tracking car. The punchy engine allowed it to easily keep pace with the more powerful contenders in our test, while the lack of body roll meant I was left with a stable platform from which to shoot consistent pictures.

By choosing Dynamic mode on the standard-fit Drive Select system, I could have a fair amount of fun on the track, too. It’s no sports car, but the Audi’s quattro four-wheel-drive system and compact dimensions meant that running a few laps of the circuit was a surprising amount of fun.

And it’s that combination of sprightly handling, relaxed motorway manners and a powerful diesel mated to a slick-shifting seven-speed S tronic automatic transmission that has made the Q3 such a great car to run. Agreed, it’s not the best-looking model around, and it’s certainly not the biggest nor most practical vehicle I’ve ever had to haul my camera gear around in. However, it has made my life so easy that its successor will have a very tough act to follow.

“What’s really impressed me about the Q3 is its economy. We’ve managed to achieve 40.5mpg in our time with it – which is respectable for an auto.”Dean Gibson, Deputy road test editor

“I really don’t get this Audi model. I saw one parked next to an A3 Sportback. The Q3 wasn’t much higher and doesn’t look much bigger – who exactly is this car aimed at?”Barney, via www.autoexpress.co.uk