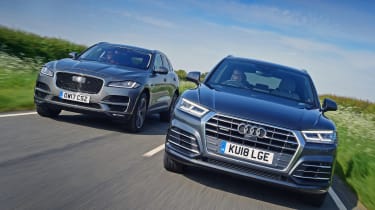 Audi’s Q5 is a fine premium SUV, but until now we haven’t tested it in 3.0 V6 TDI form, with the range limited to just 2.0 TDI turbodiesel and 2.0 TFSI petrol versions.

While most models in this class are still sold with a smaller, cheaper and more efficient 2.0-litre diesel, a larger V6 makes plenty of sense in already refined cars like the Q5. It serves up easy, effortless cruising ability and adds smoothness to the package. There might be a financial penalty to pay on the purchase price and running costs, but these cars still add up with bigger diesels under their bonnets.

The Jaguar F-Pace 3.0d Portfolio has proven this for a few years now, and is our current favourite premium SUV with a big diesel. So, does the Audi’s larger engine edge it ahead of the Jaguar? Let’s find out. 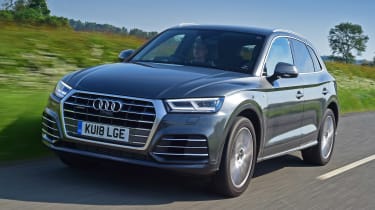 For: Engine feels muscular, cabin quality and tech, smooth and controlled ride.Against: Performance not quite as impressive as F-Pace’s, trails the Jag on load space slightly.

When Audi launched its all-new second-generation Q5 back in 2017, a 3.0-litre V6 TDI was always in the product plan. But the firm said this engine would follow at a later date. That time has now come, and it’s been worth the wait, because this larger, smoother TDI enhances the Q5’s natural characteristics even further.

At the forefront of that is refinement. The V6 pulls smoothly, and it’s hooked up to an eight-speed automatic and Audi’s quattro four-wheel-drive system as standard. It produces 282bhp and 620Nm of torque for effortless performance. 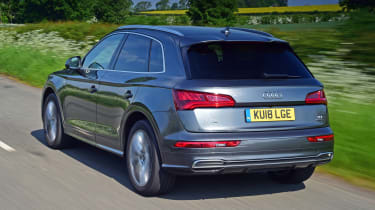 This output is some way down on the Jaguar’s, but the Q5 is 74kg lighter, which offsets the F-Pace’s extra oomph. This meant it was quicker from 0-60mph at our test track, taking 6.2 seconds to the Jag’s 6.9-second effort.

In-gear performance is more to do with torque, and while the lighter Q5 still matched the F-Pace between 30 and 50mph in third and fourth, the more torque-rich Jag had the edge between 50 and 70mph in fifth gear and above – by a sizeable 2.7-second margin in eighth.

The Audi offers superior ride comfort, though, because our Q5 was fitted with the £2,000 adaptive air suspension. That’s a costly option, but the Q5’s price advantage gives you headroom to delve into the extras. Besides, with the system fitted, in Comfort mode it floats serenely over all but the harshest, most torn tarmac. Riding on 20-inch alloys (a £900 extra), it feels compliant but controlled, and exhibits nearly as much agility as the sporty F-Pace.

The steering doesn’t deliver any feel, but the set-up is direct, although exploiting this and being aggressive with your inputs causes the car to roll. You could always switch the dampers to Dynamic mode, but the Q5 feels harsher here, with that forgiving ride reduced, as with body lean. 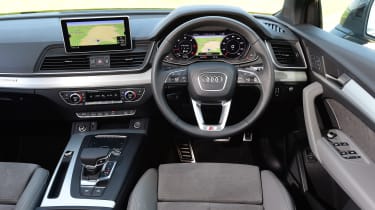 On top of that, our car had the £1,395 Technology Pack, which adds the 12.3-inch Virtual Cockpit display and a larger 8.3-inch screen on top of the dash. You also get wireless charging and three years’ connected services. 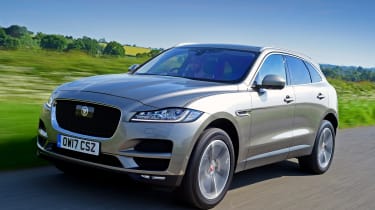 The F-Pace marked new territory for Jaguar. It was the brand’s first SUV, and although it was entering a competitive sector full of rivals that had been honed over a number of generations, the British firm got the recipe right first time; the F-Pace went straight to the top of the class.

Under the skin the car uses much of the aluminium know-how Jag gained through the development of its current XE and XF saloons. Yet despite using some of this lightweight material in its construction, the F-Pace is quite a bit heavier than the Audi, at 1,954kg.

You do feel this on the move, but the chassis set-up does its best to counteract the bulk, because the steering has just the right level of precision for a car of this type, and there’s enough grip to back up how quickly the Jag reacts to your inputs. 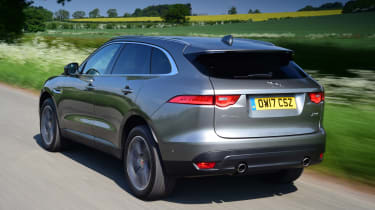 It feels more dynamic than the Q5, thanks in part to the four-wheel-drive system. In Dynamic mode especially, you can feel the F-Pace shuffling torque to the axle that needs it most, boosting agility and traction.

There’s plenty of torque, too – 700Nm from the 3.0-litre turbodiesel V6 – and more power than in the Audi, at 296bhp. However, as we’ve seen, that extra weight meant the Jaguar couldn’t match the Audi off the line, even if it just had the edge in gear.

Another area where it trails the Audi is ride quality. Our F-Pace featured Jag’s £1,185 Adaptive Dynamics Pack, which has a system that constantly adjusts the adaptive dampers within the parameters determined by the driving mode you’ve selected (these include Normal and Dynamic, plus settings for adverse weather). 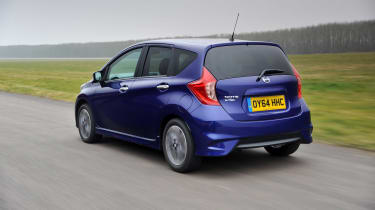 In the default comfort setting the Jaguar rides sweetly on 19-inch alloys, but it still doesn’t have the plusher, more fluid-feeling suspension control of the Audi. You notice this over bigger bumps in particular.

It’s still nicely refined, though. Helped by the smooth-shifting eight-speed automatic box and purring engine, which never feels stretched, whisking the car along involves seemingly as little effort as it does in the Audi.

It’s a shame that the interior quality can’t match the level of refinement the Jag serves up. Despite the higher price, the F-Pace’s materials don’t feel as expensive or as tactile as those in the Q5, with some awkward ergonomics not helping things. 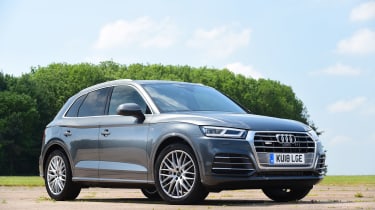 While smaller diesel Q5s make more financial sense, this 3.0 TDI is beautifully built. Air suspension ensures it rides well, plus it’s cheaper to buy and run than the Jag. It’s not as practical, but is far from cramped, and is the higher-quality, more solid, more advanced-feeling vehicle. 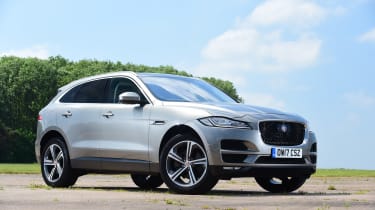 The F-Pace is still a brilliant SUV that’s quick, smooth and refined in 30d AWD Portfolio form. But although it’s more practical than the Q5, it trails on quality and isn’t as comfortable. It’s also more pricey, and at this level the sub-standard infotainment means it just misses out on the win.