The new plug-in hybrid Audi Q5 55 TFSI e is expensive, but it offers the perfect blend of pace, practicality, comfort and efficiency 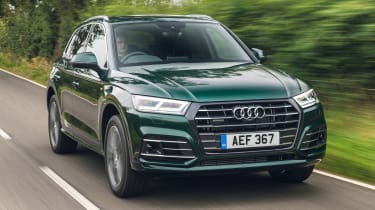 The Audi Q5 55 TFSI e manages to be virtually everything to all people. Fast, practical, quiet, efficient, comfortable, cheap to run, and just as sumptuous as you expect. It’s not cheap to buy, but otherwise this Q5 is hard to fault if you want a plug-in family car without the range anxiety of pure electric.

What could be better than a plug-in hybrid Audi Q5? All that roominess, the executive-plush interior, neat dynamics and enviable brand swagger, complete with an official 26 miles of electric running and a 2.0-litre petrol engine to keep you going after that. It could well be the plug-in hybrid that a lot of buyers have been waiting for.

Combined with the electric motor, this brings power up to 295bhp for the entry-level 50 TFSI e, or 362bhp for the 55 TFSI e that we’re testing here. The idea being, of course, is that you can do the school run or shorter commutes virtually fuel-free and then have the freedom of a petrol car at the weekend. 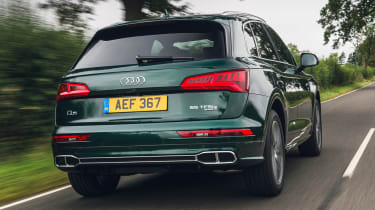 And in practice, it really is close to the best of all worlds. In pure-EV mode, it’s silent, suave and just generally makes you feel full of smug. You can do motorway speeds in electric mode with ease, and of course the uninterrupted stream of power is ideal for slicking around the city.

We managed to get some 20 miles of electric running during our motorway-heavy test drive, so 25 miles should be possible in good weather around tow. With low battery charge and in Hybrid mode, the turbocharged petrol engine still returns close to 40mpg in unhurried use.

Just don’t forget that, as with any plug-in hybrid, you have to charge the Q5 regularly to get the efficiency on offer. That’s easy enough to do – a normal three-pin domestic socket will deliver a full charge in around six hours, while a 7kW home wallbox will do it in two – and the necessary cables are supplied as standard. 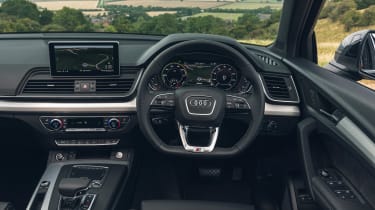 For longer journeys, Hybrid mode is your best bet. Stick a destination in the car’s nav and it automatically switches between electric and petrol running as it deems best in order to gain the most efficiency. Clever stuff, since it even prioritises electric running for slower roads and petrol for main artery routes.

Not only that, but it switches cleanly between the two powertrains without any sudden change in throttle response or lurch in progress to distract you from Radio 4 or your latte-to-go. Plus, the petrol engine itself is super-quiet, and barely any more intrusive on a steady throttle than the electric motor.

It’s also very comfortable. The Q5 trim range has had a shake-up with the addition of the plug-in hybrid, but if you want air suspension then you have to go for one of the Vorsprung trims that have it included – it’s not an option on the others. Mind you, our S Line Competition 55 TFSI e rode with impressive composure, feeling taut yet pliant – an impressive balance for a heavy, high-riding SUV. We’d say the adaptive air set-up really is unnecessary.

The TFSI e doesn’t encourage you to drive as vigorously as an SQ5 does, but it’s tidy and balanced in corners, and the straight-line performance in the 55 TFSI e isn’t far off that of the SQ5 models, either. Not bad for a car that also gets free entry into London (until October 2021, at least) and cheap company car tax. 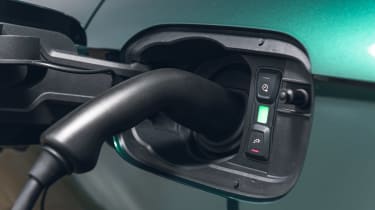 You even get ample passenger space in the back and a good sized boot; at 450 litres it’s 95 litres smaller than the standard Q5’s and there’s no option of a space-saver tyre. But it’s still easily good enough for a chunky buggy or big dog. The biggest annoyance is the bulky cable case that hooks onto a lashing eye and hangs around, taking up space in the boot.

And while it does get LED headlights, heated and electrically adjustable seats, Audi’s impressive nav system, Apple CarPlay, wireless phone charging and more, you’re still likely to want to add metallic paint and a panoramic sunroof, as well as the Comfort and Sound pack for keyless entry and the Tour pack to get adaptive cruise control. Before you know it you’ve got a £60k car. A Volvo XC60 T8 Twin Engine isn’t going to be as efficient as the Q5 when it’s got the petrol engine going, but spec-for-spec it’s certainly cheaper to buy.