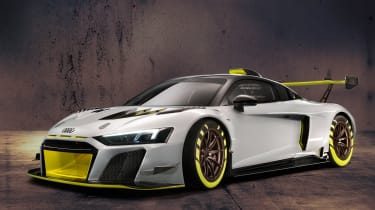 Audi Sport customer racing unveiled a track-only version of the R8 Coupe at this year’s Goodwood Festival of Speed. Designed to work with the 2020 GT2 racing regulations, the GT2 is priced at €338,000 (around £300,000).

The R8 LMS GT2 features a range of aerodynamic upgrades, a revised chassis and a tuned version of the standard car’s V10 engine. It’s the most powerful version of the 5.2-litre unit yet: it produces 631bhp and “more than 550Nm of torque” which is fed to the rear wheels only via a seven-speed dual-clutch gearbox. Engine upgrades include a new ram-air intake and a reconfigured ECU.

It’s based on the same platform as the production R8 Spyder, albeit strengthened with a steel roll cage. Elsewhere, the R8 GT2 gets lightened wishbones, redesigned suspension geometry, reconfigured anti-lock brakes and a new traction control system. Its dampers, brakes and calipers are all lifted from the same modular kit used by the R8 GT3 and R8 GT4. 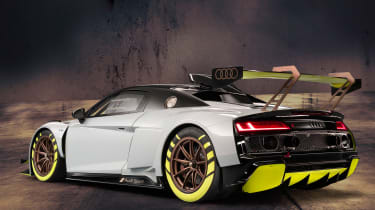 Like all GT racers, the R8 GT2 features an aggressive aero package comprising a huge front splitter, dive planes, CFRP underbody panels and a rear diffuser. Its exhaust has been routed through the rear bumper to reduce drag, while its rump supports an enormous rear wing. The aim of GT2 cars are to produce less outright downforce than GT3 cars, so that they are less demanding to drive for amateur racing drivers.

Other Le Mans-specific upgrades include an FIA-approved fire extinguisher system, six-point racing harnesses, safety nets and roof-mounted escape hatch which allows access for the rescue team in the event of an accident. Audi’s own carbon fibre racing seat is also provided.

The roadgoing R8’s windscreen and side window glass have been replaced with polycarbonate, while the standard car’s doors have been swapped for aluminium reinforced carbon-fibre units to conform with LMGTE side impact protection regulations.

Chris Reinke, Head of Audi Sport customer racing, outlined the German brand’s interest in the GT2 class as an amateur racing series, stating: “the new GT2 class has the potential to fill a gap. Eleven years ago, we entered GT3 racing, which has evolved into a highly professional category. 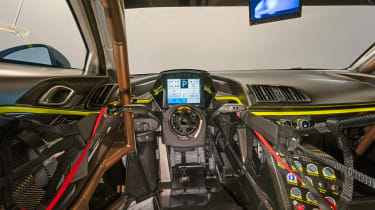 “The expense incurred by drivers and teams is high, and racing there is not easy for amateurs. The GT2 category is ideal for gentleman drivers: its longitudinal dynamics stands for a new experience with Audi, while its lateral dynamics do not put excessive demands even on amateurs.”

Currently, series in which the GT2 can compete are being finalised. Audi has followed on from Porsche, whose GT2 RS Clubsport will be positioned as an entrant for any upcoming series, too. A road going version is likely to feature, too: while not explicitly confirming a road-going GT2, Audi Sport boss Oliver Hoffman confirmed to Auto Express that Audi is working on “more extreme cars like the RWS”.

Click here for all the latest from the 2019 Goodwood Festival of Speed...