The 204mph Audi R8 Spyder gets the 'Plus' treatment, injecting more power and reducing weight 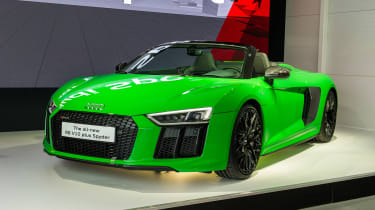 Earlier this month, Audi revealed its new R8 Spyder V10 Plus – and now the flagship supercar has made its public debut at the Goodwood Festival of Speed. Orders open on Friday 7 July, with prices starting from £147,020.

The Audi R8 Spyder V10 Plus is the firm’s fastest convertible ever. It turns the wick up on the standard R8 Spyder, using the same mid-mounted naturally aspirated 5.2-litre V10 engine but with performance tweaked to 602bhp – 70bhp more than the non ‘Plus’ version. It gets an extra 20Nm of torque (now 560Nm), alongside an ear-splitting 8,700rpm redline.

As a result, Audi promises additional performance. The 0-62mph dash takes 3.3 seconds, which is three tenths faster than before. Top speed climbs from 197mph to 204mph, too. Bosses suggest torsional rigidity has improved by 50 per cent over the Plus model’s predecessor, which boosts both handling and safety for the convertible supercar. Yet while the engine’s primary concern may be pace, Audi hasn’t neglected efficiency technology. 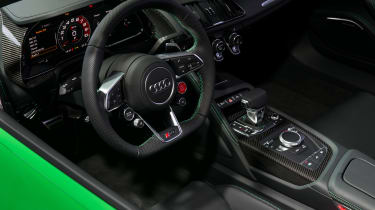 A cylinder-on-demand system can deactivate one of the cylinder banks, transforming the engine into a five-cylinder when cruising. A coasting function means the engine disconnects from the drive if the driver lets off the accelerator at speeds over 34mph, and a stop-start system is fitted, too. This is still the thirstiest, dirtiest R8 though, with Audi claiming 22.6mpg and 292g/km CO2.

Power is delivered to the quattro all-wheel-drive system via a seven-speed dual-clutch transmission, while variable torque distribution means that up to 100 per cent of the torque can be sent to one axle if the driving situation depends on it. Selectable driving modes mean that the driver can choose between various drivetrain and suspension setups.

Weighing in at 1,695kg, the convertible roof mechanism and additional chassis strengthening adds 140kg to the curb weight. It is, however, 25kg lighter than the normal R8 Spyder thanks to the usage of more lightweight materials, such as carbon-fibre reinforced plastics and aluminium components. The folding roof itself is primarily made from aluminium and magnesium, but is finished with a cloth exterior skin. It takes 20 seconds to open and close, and can be done on the move at speeds up to 31mph. 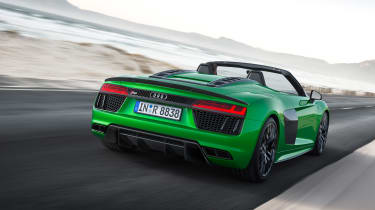 An aggressive look is carried over from the R8 V10 Plus coupe with a large, carbon front splitter and gloss black grille at the front. A diffuser capable of generating 100kg of downforce, plus a carbon lip spoiler, are found at the back, and lightweight 19-inch aluminium wheels are fitted as standard. Inside, carbon fascias trim the dashboard, while deep bucket seats and Audi’s virtual cockpit system are fitted as standard. Of course, Audi Exclusive can trim the cabin however you like, while the rich green paint seen here is expected to cost around £4,000.

We’ll be driving the new Audi R8 Spyder V10 Plus in August, with first customer cars due towards the end of the year.

What do you make of Audi's new soft-top supercar? Let us know in the comments.