It is difficult to imagine the world without quattro. Audi's all-wheel-drive system has made a huge impact on the high-performance car market, and is celebrating its 25th birthday in 2005. 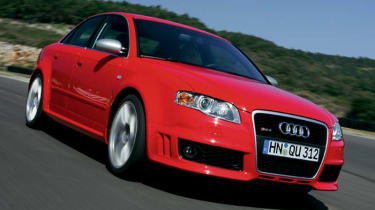 Audi has created a very fast and capable supersaloon. It's easily powerful enough to rival the M3, but the BMW has the dynam?????pLing is the major difference, as the RS4 lacks the M3's precision on initial turn-in. Yet the Audi is a more desirable everyday car, with 4WD inspiring more confidence on the UK's wet roads. It's expensive, but Audi is clearly on to a winner.

It is difficult to imagine the world without quattro. Audi's all-wheel-drive system has made a huge impact on the high-performance car market, and is celebrating its 25th birthday in 2005.

Although originally developed to provide more traction for the German manufacturer's Eighties rally cars, the mechanical arrangement has been continually uprated ever since. It is now used on Audi's fastest and most luxurious models, machines that are unlikely ever to make a deliberate trip off-road.

In fact, there is even a separate company within Audi - quattro GmbH - responsible for turning out the fastest and most potent quattro-equipped cars. The RS-badged machines it builds are big news, so when Auto Express was invited to get behind the wheel of the latest RS4, we simply couldn't say no. Promising to be the fastest roadgoing A4 ever, the newcomer is one of the most spectacular-looking Audis built.

Finished in red, our test machine not only had enormous alloy wheels, but also flared arches and a gaping radiator grille trimmed in silver to set it apart from lesser models. At the rear, two huge exhausts and the distinctive red and silver RS badge add extra drama to the neatly chiselled boot.

But the RS4 is much more than just a piece of fine art; it is a technical wonder, too. Its normally aspirated engine delivers 414bhp, and is fitted with FSI direct-injection technology to give better economy as well as performance.

We didn't get much opportunity to measure the stunning newcomer's fuel consumption, but the RS4 is certainly fast - the four-wheel-drive system really helps traction off the line, so the sprint from 0-62mph is completed in a highly impressive 4.8 seconds.

Performance is boosted further by the addition of a new Sport button on the steering wheel. Press it, and drivers should notice a marked difference to the throttle response. It is sharp enough in normal mode, but with the system engaged the accelerator reacts rapidly to every single flex of your foot. On the track, this is fine - although for normal road driving it could prove tiring.

In-gear punch is particularly good, however, and when you push on to the 8,250rpm red line - one of the highest for a V8 - the noise is simply incredible. At high speeds, the engine note settles down to a distant rumble, so the RS4 will not wear drivers out too much on long motorway journeys. What is not so clear is the new car's ride quality, as our early first drive was confined to a smooth race track - so we will reserve judgement until it comes to the UK.

The transformation Audi has made to the handling is much more obvious. We drove the RS4 back-to-back with an S4, and there is a marked difference between the two; the former feels far sharper and more responsive to steering inputs. The chassis balance has been improved, too, so it does not feel as nose-heavy as the lesser model and understeer does not set in as early; there is lots of grip from the four-wheel drive, and the huge brakes stop the car efficiently.

Overall, the RS4 is a spectacular demonstration of the quattro system, as well as the company's performance engineering prowess. If this is the way Audi celebrates every quattro birthday, there should be some happy drivers out there for years to come.