The Avant blends pace, practicality and style in a way that only an Audi can 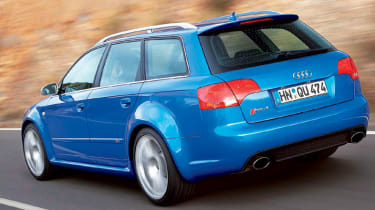 In offering a range of RS4 models, Audi's sporting car line-up is one of the strongest. The Avant is the latest in a long line of estates that blend pace, practicality and style in a way that only an Audi can. The Cabriolet breaks new ground for the firm, and is surprisingly capable. It might be overpriced, but as Audi points out, this year's allocation of 150 drop-tops in the UK is already sold.

Auto Express's exclusive first drive of Audi's all-new TT will be grabbing the headlines this week, but the firm's sports car stable has two more thrilling members making their debut. We've already been impressed by the RS4 saloon, but how do the Avant and Cabriolet versions measure up?

As with its illustrious estate predecessors, the new RS4 Avant blends performance, style and practicality. The imposing bodykit and bulging wheelarches of the saloon work just as well on the Avant, so there's no mistaking the estate's sporting intentions.

The normally aspirated V8 pumps out 414bhp and 430Nm of torque, and the load-lugger's 0-60mph time of 4.7 seconds is only a tenth slower than the saloon's. Revving to 8,250rpm, the powerplant provides a fantastic soundtrack, while the short-throw six-speed gearbox is Audi's best-ever.

Inside, the Avant's 442-litre boot capacity is 18 litres smaller than the saloon's, but once you fold the rear seats, it increases to a very practical 1,354 litres. Crucially, opting for the Avant doesn't mean you compromise on driver enjoyment, because like the four-door, it's savagely quick, involving and exciting. The chassis delivers amazing stability, while the quattro drivetrain ensures excellent traction.

With this much performance on tap, some drivers will want to feel the wind in their hair, too. So for the first time the German firm has launched an RS4 Cabriolet. You might expect the A4 drop-top to struggle to cope with this much power, but the engineers have done a good job of strengthening the body. As a result, the RS4 Cabriolet has the same dynamic abilities as the saloon and estate, with only a tiny amount of body twist when cornering.

The car's fully automatic fabric roof folds in only 21 seconds, which allows for even better appreciation of the V8 soundtrack. But when the standard-fit high-density acoustic top is raised, wind noise at speed is impressively low. And while the extra strengthening has added 195kg over the saloon, the Cabriolet still offers scintillating performance.

Whichever model you choose, excitement is guaranteed. The only problem is that RS4 fans will need deep pockets; the Avant costs £51,825, while the Cabriolet weighs in at a hefty £59,625.

For an in-depth buyer's guide on the Audi RS4 from Classic and Performance Car click here...