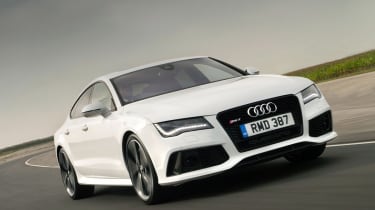 The Audi RS7’s engine is a real star. It’s powerful, tractable and makes plenty of the right noises. But it’s stuck in a chassis that doesn’t offer much for the keen driver. Its technology is impressive, and makes the car easy, flattering and forgiving to drive, but the set-up makes you feel like a passenger, especially when you take on a gnarled British B-road.

The Audi RS7 gets a mighty 4.0-litre V8 engine crammed under the bonnet that dominates the driving experience. This becomes evident as soon as you press the start button on the centre console.

It’s the same engine you'll find in the RS6, and starts with a hushed but bassy woofle, and barely even rises above tickover as you release the brakes and start to move. Above 15mph, at low engine speeds, the engine’s cylinder-on-demand system allows it operate as a V4 – although it’s hard to tell when half the cylinders are deactivated. This helps save the super unleaded, as does the swift, smooth stop-start system.

But squeeze the accelerator to the floor and, in an instant, the once placid engine roars in the nose as all eight cylinders and two turbos spring into action, the RS7’s tail squats and the car fires forwards. Acceleration is both relentless and near-seamless thanks to the fact this car uses an eight-speed full automatic, rather than a dual-clutch transmission.

You can leave the gearbox to shift itself, or change gears using wheel-mounted paddles. This is more satisfying on downshifts, as each gearchange is accompanied by a rasp, crackle and pop from the exhausts, although it’s not quite the aural treat AMG’s V8 delivers.

It’s an RS car, so the engine should be the star, and that’s the case. But sadly it’s not matched by the rest of the driving experience.

While acceleration and grip levels are huge, the ride on the RS Sports suspension and optional 21-inch rims might be OK on an Autobahn, but is far from acceptable on a UK B-road. It’s far too firm, even in its Comfort setting, and bounces you around in your seat when driving hard, and gives you backache on longer drives. The wheel and tyre package really struggles with potholes, too, sending loud thumps and bangs through the car’s body – the option of air suspension might well be a box worth ticking.

On acceleration, the wide tyres hunt and squirm across the road surface, causing the steering wheel to writhe in your hands while the car’s electronics try to ensure maximum engine power meets the road.

Cornering is impressive from a technical point of view – the RS7 weighs nearly 1,800kg, but its hard suspension, hugely powerful optional ceramic brake discs, and clever sports rear diff do make it feel agile, albeit in quite a removed way, like the car is driving you rather than the other way around. That remoteness extends to the lack of feel from the steering wheel, brake pedal or even your seat. And once you’ve sampled the amazing engine a few times, the chassis’ lack of talent conspires to make the car feel disappointingly dull to drive.

The RS7 has plenty of showroom appeal – its big wheels, clean, crisp lines and standard-fit LED headlights make sure it looks just the right side of bling. The interior isn’t especially exciting, though, which is a shame in a car that costs the wrong side of £110,000 as tested.

As a performance car, the RS7 is an impressive technical achievement. It’s competitively priced in its class, well specced and looks like a real star on paper. But, if you’re a keen driver, the lack of involvement and the poorly resolved suspension setup is frustrating, especially when you unleash the cracking engine for the first time.