We review the new Audi RS7 Sportback, powered by a 4.0-litre twin-turbo V8 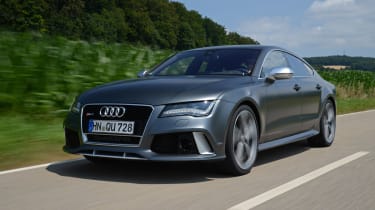 Audi has delivered another RS model that moves the boundaries of performance for premium saloons. A 0-62mph time of under four seconds is unbelievably fast for a car like this, and the best thing is that it doesn’t feel like a scary car to drive at all – in fact it flatters you. Next to the Panamera Turbo it looks like great value but our hearts can’t help thinking the similarly priced CLS 63 is the more involving choice and our heads would tell you to go for the near-identical but £7,000 cheaper RS6 Avant.

The Audi RS7 Sportback is the performance flagship of the A7 four-door coupe range and boasts the kind of acceleration that could shame a supercar.

It’s all because of the 4.0-litre V8 that sits underneath the RS7’s bonnet. It’s twin-turbocharged, it produces 552bhp and delivers peak torque of 700Nm between 1,750 and 5,500rpm. Combine that with four-wheel drive and you get absolutely relentless acceleration and an official 0-62mph time of 3.9 seconds.

This engine dominates the whole driving experience, delivering a hit of instant acceleration and – if you’ve specified the sports exhaust – a deep cackling soundtrack. It has a sensible side, too, and can run on four cylinders to improve fuel economy, for an official figure of 28.8mpg.

As standard, you get adaptive air suspension but our car was fitted with a stiffer sports suspension which uses steel springs. Set in Comfort mode it’s firm but without the crashiness that sometimes affects RS models. Dynamic mode is a little too bouncy, and it may even be better to ditch the optional sports springs altogether – we drove an RS6 Avant recently with air suspension and it rode quite nicely.

Through the bends there’s a seemingly unending level of grip and traction. Flooring the throttle or turning in hard on the brakes doesn’t seem to upset its balance at all, it will just quickly right itself before exploding off down to the next straight. It’s impressive for all its ability but a Mercedes CLS 63 AMG feels more playful and involving.

Probably the RS7’s closest rival in terms of performance is the Porsche Panamera Turbo – both have identical top speeds and 0-62mph times – but the two have wildly different prices. Starting from £83,495, the RS7 is nearly £25,000 cheaper than the Porsche.

If you’ve got your mind set on buying a fast Audi, though, why not save yourself a further £6,600 and go for the RS6 Avant? It boasts identical performance, it feels pretty much the same in the bends and it’s the more practical choice.