We take a seat in the Audi that drives itself, the RS7 Piloted Driving concept - now with video! 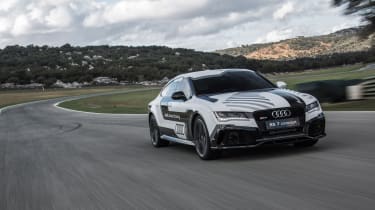 Audi’s RS7 Piloted Driving concept car gives a tantalising glimpse into the future of motoring according to Audi. The idea of being driven by your car takes a lot of getting used to but even in our short time with the vehicle, we learned to trust the tech. It’s refreshing to learn that Audi doesn’t see the driver being replaced entirely but wants the autonomous tech to set in for those more menial trips behind the wheel.

Audis will be able to drive themselves on the motorway and even valet park themselves before the end of the decade. That’s the promise of Thomas Muller – head of development of braking, steering and driver assistance systems at the German firm. But don’t worry; Audi doesn’t want to create robot taxis that take over from humans entirely.

Muller made the pledge as journalists were given hot laps round Ascari racing circuit in Spain by ‘Bobby’ Audi’s autonomous self-driving RS7. The car uses a mixture of radars, cameras and GPS to sense where it is on the track, while a small computer in the boot decides how to steer, brake and accelerate to follow the racing line at the optimum speed.

To show off just how fast the car can drive itself round the circuit, Audi gave us a little challenge. Could we drive a normal RS7 quicker than Bobby? 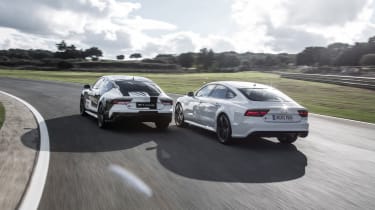 We went out on track first to set the benchmark time – 2min 12.5 seconds. Not exactly Lewis Hamilton-fast, but would it be quick enough to beat an autonomous car?

Climbing inside ‘Bobby’ you’d never know what it (he?) was capable of. It just looked like a standard RS7 except for a fighter-jet style covered switch in front of the central armrest and a thumb-operated plunger that looks like the controller from an old Scalextric set.

The first switch puts the car into auto drive mode and then a technician sat in the driver’s seat has to hold the plunger down throughout the duration of the drive. This acts as a failsafe - releasing it automatically disengages the automatic pilot and brings the car to a halt. 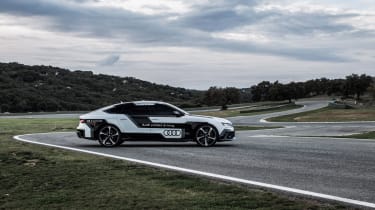 For this reason we had to experience ‘Bobby’ from the passenger seat. However, what we saw was still impressive. As soon as autonomous mode was engaged the car turned itself off, restarted its engine and waggled its steering wheel as part of a systems check. A few seconds later we were pushed back into our seat as the 560bhp RS7 accelerated hard up the straight and towards the first chicane all of its own accord.

As it approached the braking boards put out as a guide for the journalists, Bobby slammed on its anchors, the steering wheel turned sharply and its nose darted purposefully towards the apex.

Looking across to see the technician with his hands nowhere near any of the controls was alarming. Throughout the lap Bobby faultlessly followed the racing line, occasionally counter steering to keep the hefty RS7 in check and help prevent a slide. 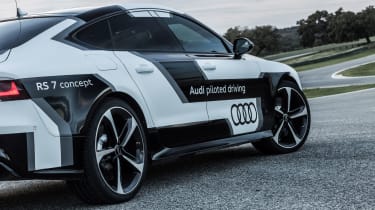 Overall, Bobby’s lap felt a little more composed than ours, though perhaps a little bit slower. And as we crossed the line it was – but not by much. The car with no driver completed the lap in 2min 14.6 seconds. So it was one nil to the humans.

But then, as Thomas Muller pointed out, Audi doesn’t want to replace the driver in the same way Google does with its autonomous car. “We are not building robot taxis,” he said. “We want to make cars that still give you the pleasure to drive when you want to but can take control for the boring tasks like commuting in traffic or to lend a hand to improve safety.”

Indeed, some of what Bobby can do will be introduced to production Audis in the very near future. From next year there will be an extension of the city safe automatic braking system, which will use short-range radar to look out for oncoming obstacles when a car is turning right across a junction. Also, ESP systems will be supplemented by mild assistive counter steering to further help prevent a spin. 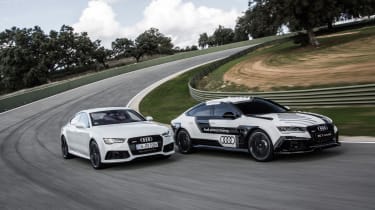 Before the end of the decade Audi plans to be able to offer driver assistance systems which allow a car to pilot itself on the motorway or find its own parking space without the ‘driver’ monitoring the situation or having their hands on the wheel.

However, before this can happen there needs to be a change in legislation. The Vienna Convention, which European countries including the UK have signed up to, states that “the driver must steer his car”.  Thomas said: “There are a lot of regulations involved in piloted cars. That’s why, for the first time in my experience with Audi, there are as many lawyers as engineers working on this project.” 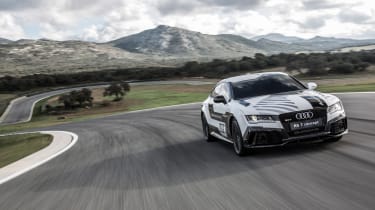 It was for similar legal reasons that we weren’t allowed to sit in the driver’s seat on our hot lap in Bobby. However, after the track was cleared, Thomas’s team allowed the car to drive the circuit at full pelt completely on its own with no one at all inside it.

For safety there were marshals dotted about the track with remote cut-out switches in the unlikely event of a technical problem. Or Bobby suddenly becoming self-aware and taking itself off for a hot wax and polish at the local car wash…

Find out more about self-driving car technology in our round-up.