It's got all the right credentials for a high-performance flagship car, but will Audi's S6 meet expectations? 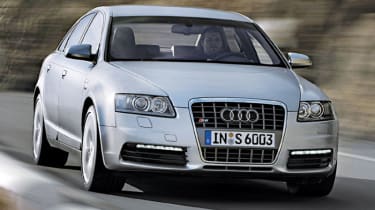 A Stunning V10 gives Audi's saloon blistering pace, and the quattro set-up means secure handling. With its discreet looks and classy cabin, the S6 is highly desirable - but enthusiasts might be disappointed, as the engine is tuned for torque rather than power. Even so, when deliveries start in July, there are bound to be plenty of takers.

Supersaloons aren't what they used to be! In the pursuit of ultimate pace, it's no longer good enough to make do with a 'mere' six or even eight cylinders - 10 is the minimum in the fast executive market.

So, with a reworked version of the V10 Lamborghini Gallardo engine, plus Audi's famous quattro drivetrain, the new S6 has all the right ingredients. The storming RS4 also proves the firm is on top of its game, and we couldn't wait to try this latest performance flagship.

Exterior clues to the power on offer are subtle, with flared front wings, an integrated rear spoiler and discreet S6 badging. Buyers also get unique instruments and Alcantara-clad sports seats.

The engine is shared with the Audi S8, but has effectively been detuned here, and produces 429bhp and 540Nm - the latter from 3,000rpm.

It is mated to a six-speed Tiptronic auto box, whose gears can be selected manually using smart aluminium-look paddles. Helping to deploy its power is the quattro four-wheel-drive system, which is set up to deliver 60 per cent of its torque to the back wheels.

Combined with revised suspension, this provides secure handling and supreme traction in all conditions. You can feel the effect of the rear-biased set-up exiting slow bends, but enter a corner too fast and the V10's weight starts to show as understeer sets in.

In reality, the huge torque is better suited to lazy performance than frenetic pace, as is the precise but numb steering. High-speed refinement is first-rate, and while you are treated to that unmistakable V10 sound under acceleration, the engine is barely audible at cruising speeds. There's always plenty in reserve, too, and if you get carried away, 18-inch brakes deliver huge stopping power.

However, long-distance refinement is compromised by the firm suspension, which results in an unsettled ride over poor surfaces. This is unlikely to deter buyers, though, because the security of 4WD and the option of a practical Avant make the S6 an impressive package.