How time flies when you're enjoying yourself. That's certainly true of Audi's super S6 Avant. The four-wheeled equivalent of Concorde and a jumbo jet in one, the pacey load-carrier has really been racking up the long-haul miles since we brought you our last report in issue 725. 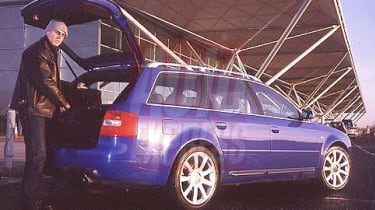 How time flies when you're enjoying yourself. That's certainly true of Audi's super S6 Avant. The four-wheeled equivalent of Concorde and a jumbo jet in one, the pacey load-carrier has really been racking up the long-haul miles since we brought you our last report in issue 725. Road test editor Oliver Marriage signed off that first article with just over 6,000 miles on the clock - the digital read-out now says 15,000. And while Ollie gently broke in the S6 in those first weeks, taking care to load it up with nothing more taxing than a few plants from the local garden centre, the big Audi is now really having to earn its keep. Mixing it on the motorways, roughing it on rutted rural tracks and criss-crossing the Channel... our long-termer has done the lot. The combination of sublime executive express, four-wheel-drive country charger and practical estate makes for a multi-talented motor. And it's even smart enough to win my own version of University Challenge - several journeys taking my undergraduate son and all his belongings to college in Southampton. However, it was on one of these suspension-groaning trips that the S6's oil warning indicator beeped on. A swift under-bonnet check at the nearest motorway services revealed that the supply needed an urgent top-up. Only problem is that the mighty 4.2-litre V8 doesn't drink just any oil, but a premium high-performance brew. You try finding Castrol SLX Longlife 2OW/30 on a Sunday afternoon. In the end, it had to wait until I could get to my local VW/Audi dealer the next morning. The S6's most worrying niggle is a loud knocking when negotiating speed humps or potholes. The noise is coming from near the front offside wheel, but I've inspected all the suspension joints and bushes, and there's nothing obviously awry. It will have to be checked at the first service. I'll also be asking Audi to look into the S6's hesitant power delivery when you need it quickly at low speed. This intermittent problem catches you out when you least expect it, and makes you wary in traffic. Other improvements I'd like to see? A tailgate release that lets you lift the boot without getting filthy hands; front wipers that don't spray water across the screen; and a wash-wipe system that doesn't clean the headlamps each time (I'm forever topping up the screen wash bottle). And while we're talking fill-ups, a few more miles to the gallon wouldn't go amiss. The 340bhp powerhouse is very thirsty, returning just over 20mpg. Even on long journeys the figure barely reaches 25mpg. Still, that's the price you pay for such brilliant performance in a car of this size. Apart from a puncture at 4,000 miles that cost £265 to replace, the S6 has been a model of reliability. The offside wheel has been kerbed slightly - I can either replace it at service, or a more cost-effective solution would be to call in a wheel-refurbishing firm, who may be able to repair the damage at a fraction of the price. However, given how filthy the car gets in winter, I'll probably wait until spring before I get it looking ship-shape. I'd expected the S6 to have already been back for its inaugural check-up, but a dash service indicator tells you when it's time, and the LCD display still reckons the engine is good for a further 2,400 miles before I need to book the car in. Our last Audi - a TT Roadster - had more than 19,000 on the clock before the service light came on, so perhaps I shouldn't be too surprised. I'll let you know how the S6 gets on in the next update.