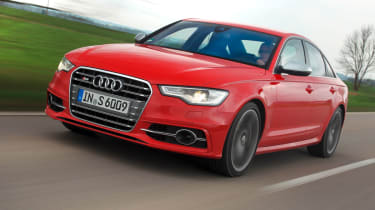 As is often the case with fast Audis, the S6 has all the ingredients for a sensational performance car, but it’s never as much fun to drive as it should be. Break it down into separate elements and the engine accelerates ferociously, refinement is remarkable and the overall quality is second to none, but the benefits over a diesel A6 aren’t clear enough. The S6 is an excellent piece of engineering, but as an ownership proposition it feels a little confused.

Fast, four-wheel drive saloons are Audi’s stomping ground, so an all-new S6 should show the company at its best. As expected, Audi has delivered a new model that’s faster, more luxurious and 25 per cent cleaner than the one it replaces.
The 4.0-litre twin-turbo V8 engine, which replaces the old V10 unit, should be familiar by now. We’ve already driven a more powerful version fitted to the 500bhp Bentley Continental GT and the 513bhp Audi S8, but here it’s tuned to a slightly saner 414bhp.
Even so, with quattro four-wheel drive it can dig its claws into the tarmac and cover 0-62mph in 4.6 seconds, while returning 29.4mpg thanks in part to cylinder-deactivation technology.

Like the S8, the S6 also features a noise cancelling system which registers ambient noise via four microphones in the headlining and pumps an opposite sound wave through the speaker system. The effect is an eerily quiet interior and incredible refinement even at speeds north of 100mph on the autobahn.
The downside is that while there’s a definite V8 crescendo as the revs rise, it always sounds more muted than you’d like, disconnecting you from the driving experience. Yes, the acceleration is impressive, but what good is that without the thrill of the chase?
It’s not just the engine that’s been beefed up – firmer air suspension, which lowers the car by 10mm, is fitted as standard, as is a sports differential to split torque between the rear wheels and 19-inch wheels as standard (20s are optional). Audi’s drive select system allows you to tailor the suspension setting, steering weight, engine and gearbox response, and even the volume of the exhaust.
With everything set to ‘Dynamic’ the S6 can find huge grip, and its ability to carry speed through corners is remarkable, but you always feel its weight shifting around which doesn’t inspire confidence. Add in steering that lacks feel, whether in its light or weightier setting, and a spongy brake pedal, and it’s not a particularly rewarding car on country lanes.
On the motorway or a quiet stretch of straight road, the S6 feels far more at home – dispatching slower moving traffic with ease, while the twin-clutch ‘box shifts seamlessly between the gears. But it begs the question, doesn’t an A6 3.0 TDI do the same but with better fuel efficiency and a significantly lower price?
There’s certainly no mistaking the S6 for lesser models in the range. Chunkier side sills, chrome bars in the grille and aluminium-finish wing mirrors subtly pump-up the front end and profile view, while a boot spoiler and quad exhausts decorate the rear.
On the inside, the already sumptuous A6 interior is enhanced with sports seats covered in soft quilted leather, a sprinkling of S6 badges and a choice inlays, ranging from carbon-fibre to a stunning dark wood with aluminium pin stripes. Maximum boot space is the same - 995 litres for the saloon and 1,680 litres for the Avant.
As a rapid, refined and luxurious way to travel, the S6 is undeniably impressive. The problem is that it’s not different enough to drive next to cheaper models in the range. If you have your heart set on a sporty S6, we’d dig a little deeper and wait until the RS6 arrives next year.
Read our review of the Audi S7 Sportback here.
Share this on TwitterShare this on FacebookEmail