Audi's answer to the Mercedes CLS gets a 414bhp 4.0-litre V8, stylish bodywork and a big boot 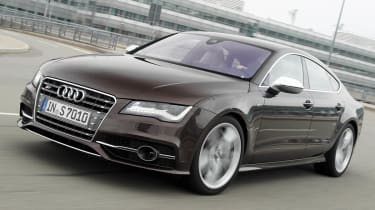 In terms of desirability, the S7 Sportback is spot on. The swooping lines, sporty touches and incredible interior will get plenty of admiring glances, but in the end it suffers from the same problems as the S6. In terms of performance and driveability, it’s too similar to the standard A7 to warrant the extra cash. If you’re after a four-door coupe with a hooligan streak, save up and buy the Mercedes CLS 63 AMG. Otherwise a diesel A7 is just as good 90 per cent of the time.

Audi now sells 41 different models – compared to just 17 back in 2001. So it’s no surprise then that as well as the S6 saloon and S6 Avant, you can also order the mechanically-identical S7 Sportback, which sits between the S6 and S8 limo in terms of price and practicality.
Starting at £61,995, the S7 will set you back £8,000 more than the S6 saloon, but what exactly do you get for your money? For starters, it has a lower and sleeker body shape that really stands out from the crowd. There’s benefits to the elongated roofline too; push a button to lift the standard-fit powered tailgate, and there’s a sizeable 535-litre boot underneath. Drop the split-folding rear seats, and that expands to 1,390 litres – 395 more than the S6 Saloon and 290 less than the S6 Avant.

Beyond that, the technology is identical. The S7 features the same 414bhp 4.0-litre twin-turbo V8, which is capable of shutting down half its cylinders to save fuel, and seven-speed S tronic twin-clutch gearbox as standard. A weight penalty of 50kg over the S6 saloon means 0-62mph takes a tenth of second longer at 4.7 seconds, although fuel economy and CO2 emissions remain the same.
On the move the S7 feels every bit as fast as it charges through the gears. Unfortunately there’s also the same feeling of disconnection from the car. It’s easy to pile on the speed, but there’s no real excitement in doing so, even with the muted V8 soundtrack burbling away in the background.
Crank the Audi Drive Select system to its most dynamic mode and the steering weights up, the gear shifts become sharper and the supple suspension is firmer. Even so, there’s plenty of body roll in fast corners (marginally more than in the S6) and while there's plenty of four-wheel-drive grip, the S7 never feels happy being flung around.
As a tool for crushing huge motorway miles in a serene and luxurious environment, and looking good when doing so, the S7 is to be admired. But then so is a A7 3.0 TDI with a few choice options. It’s hard to see where the extra £20,000 is being spent.