The standard SQ5 will continue to sell alongside the SQ5 Plus, with the latter boasting extra power and kit 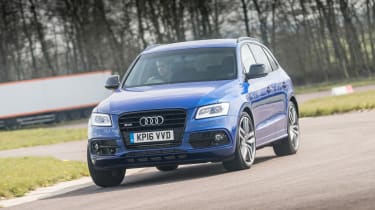 With a new Q5 just round the corner, Audi is maintaining interest in the current model by tweaking its flagship SQ5. The SQ5 Plus gets slightly more power and a shed load more equipment – making it a no brainer for anyone considering the standard car. It’s no longer the dynamic benchmark it once was, but it’s still a fast, desirable and practical SUV, with a hugely capable twin-turbo diesel under the bonnet. And now it’s got the kit list to match.

Until the all-new Audi Q5 is unveiled later in 2016, Audi will wring every last bit of life out of its existing mid-size SUV. In fact, that's where this new Audi SQ5 TDI Plus comes into play.

The standard SQ5 uses a 6cyl twin-turbo diesel engine that develops 322bhp and sends that power to all four wheels using Audi's famed quattro four-wheel drive system. This SQ5 Plus version ups the ante, as it develops 335bhp and an extra 50Nm of torque (now up to 700Nm). That does nothing to the car’s 0-62mph time – which remains a sprightly 5.1 seconds – but allegedly makes it more flexible at the top end. 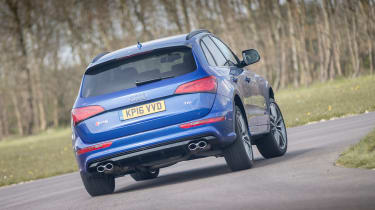 Along with the boost in power, Audi has also added a new sports differential on the rear axle, which actively distributes power beween the driven wheels. You'd have to drive the SQ5 and SQ5 Plus back to back to detect the difference and, in all honesty, only the handiest of drivers will be able to do that.

The strong and powerful V6 diesel engine still sends the SQ5 down the road with suitable shove, and there’s plenty in reserve for quick overtakes. It’s considerably faster in a straight line than the Porsche Macan S Diesel, leaving you headed toward illegal speeds before you can blink. But it can’t match the Macan in the corners. In fact, with the new Jaguar F-Pace setting such a high bar in our recent test, the Audi SQ5 is really starting to show its age.

The steering is direct, but it’s too light and comes almost devoid of feedback. As in all S models, drivers can tweak the engine, gearbox and steering response using the Drive Select button on the centre console, but it makes little difference to the car’s responses. Grip is good, though, and the ride still compliant – even on rougher roads.

The biggest difference comes when you consider the new car’s kit list. Audi is asking an additional £6,370 for this Plus variant, which for a few extra horsepower is quite a sting. However, if you don’t want a brand-new Dacia Duster with the change, you’ll benefit from 21-inch alloy wheels, a gloss black exterior pack, diamond-stitched leather seats and a powered tailgate. 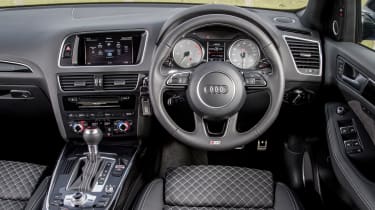 It’s a shame, then, that the SQ5 still gets Audi’s dated infotainment system and the standard car’s dull-looking dashboard. The Q5 used to be the class benchmark, but with the new Audi A4 and TT looking so classy it’s easy to feel short changed. The normal SQ5 doesn’t even get sat-nav, though, so it’s pleasing to see MMI Navigation Plus has been included as standard on this new Plus model.

While you’ll pay more upfront for the SQ5 Plus, you won’t suffer any additional pain at the pumps. The car manages the same 42.8mpg and 174g/km CO2 emissions as the standard SQ5, and Audi even claims slightly better urban consumption thanks to the improved low-down grunt.

Practicality and bootspace are unchanged, too, with enough room in the rear for three tall adults.