The new Audi SQ5 is the first-ever diesel S model – so is it worthy of the badge? 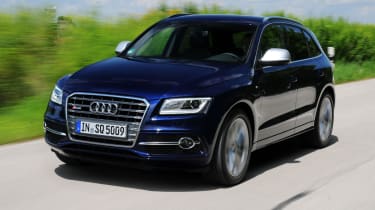 You’ll either find the SQ5 TDI soulless or a masterclass in understated luxury. It goes quicker than any SUV needs to and still offers good economy thanks to its incredible diesel twin-turbo. It has plenty of grip, too. A Q5 with an S badge was never going to be as sporty as an S4 or S6. But it’s a fine way of going extremely quickly, and still very desirable.

A revolution has been brewing at Audi and this is the result: the SQ5. It’s the first Audi SUV to wear the S badge, plus the first S-badged car to feature diesel power.

The statistics tell a good story. Audi’s 3.0-litre twin-turbodiesel has already impressed in the A6 BiTDI, and the company claims the 309bhp and 650Nm of torque will take the SQ5 from 0-62mph in 5.1 seconds. The car will go on to an electronically limited top speed 155mph, too.

That’s on a par with the performance of the S5 Sportback, which is powered by a 328bhp supercharged V6. Yet more importantly, the SQ5 will return 39mpg. This is 4.1mpg more than the four-door S5, but a full 5.1mpg less than the regular 242bhp Q5 3.0 TDI.

From behind the wheel, the new car feels as quick off the mark as the figures suggest. And thanks to the twin turbochargers, the power is spread nicely throughout the rev range, with the smaller turbo boosting at low revs and the larger one providing high-rev punch at up to 4,500rpm.

Acceleration is accompanied by a delicious bassy rumble, courtesy of a sound actuator in the exhaust which amplifies the engine note. As there’s no sports rear diff, the SQ5 doesn’t feel as agile as S-badged saloons and estates, but thanks to quattro four-wheel drive it grips very well indeed.Yet while there’s not much body roll through corners, there’s not much feel from the steering, either. Audi’s Drive Select system enables you to choose from three different settings, but all they do is add weight; they don’t add feedback.

Better judged is the omission of the active suspension set-up of other S-badged cars: Audi rightly says the SQ5 doesn’t need this, as the ride remains comfortable even though the suspension is 30mm lower than on other Q5s and the car is fitted with vast 20-inch alloy wheels.

The SQ5 certainly feels like a flagship in every other respect, too. Styling-wise, the S badge is accompanied by a sportier bumper and rear diffuser, those bigger wheels with larger brake discs, and quad exhaust pipes. As you would expect from an Audi the cabin is superb, with chrome highlights and an oak veneer finish, plus an attractive and well laid-out dash. The leather sports seats are really comfortable, too.

So the SQ5 is a jack of all trades: a comfortable, stylish and very desirable premium SUV with a ferocious turn of speed thanks to its superb 3.0-litre diesel. It’s not an out and out performance car, but it’s a fine addition to the Q5 range. And while it’s far from cheap, at £43,015, it provides plenty of pace for the money.