The 309bhp Audi SQ5 is the first ever diesel-powered S model, and it has finally arrived on British roads 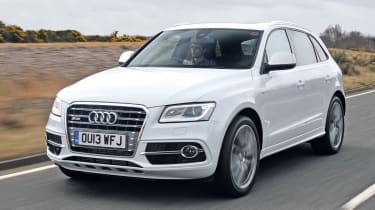 Ignore the fact it wears an S badge, and the SQ5 is a fantastic car. Not only is it fast off the line and in-gear, but it grips and handles better than a standard Q5 without losing too much comfort or refinement. The problem is, drivers expect things from S models that this Audi simply doesn’t deliver – namely focused handling and frantic, raucous acceleration.

The new Audi SQ5 is the manufacturer's first-ever S-badged SUV, and also the first diesel-powered S model. We’ve already driven it on the Continent, but now we’ve tried it in the UK.

This super-SUV is seriously quick, and there’s not much else like it on UK roads. Power is from a 3.0 twin-turbodiesel, which allows for 0-62mph in 5.1 seconds. Amazingly, that’s six-tenths quicker than the Porsche Cayenne Diesel S.

With the smooth eight-speed auto box providing shifts, you get a huge surge of torque and impressive throttle response. It’s surprising just how quickly the SQ5 builds speed, not least because it never feels frantic.

The diesel sounds very much like a quiet petrol engine, which further removes the driver from the process. The good news is that Audi has managed to keep running costs comparably low, with economy of 41.5mpg and CO2 emissions of 179g/km.

Alterations to the SQ5’s chassis aren’t as widespread as you’d expect, with suspension that’s 30mm lower and stiffer the only noteworthy change. Despite that, the whole car feels far more responsive and resistant to body roll.

There’s much more grip, too, giving the SQ5 handling that you’d expect from a Cayenne. But the major difference between them is involvement: the Porsche has a lot more steering feedback.

Drivers can tweak the engine, gearbox and steering response via the Drive Select system, yet this doesn’t do much to increase excitement. Although slightly quicker responses and heavier steering are noticeable, not much else is different.

The good news is the Audi still rides extremely comfortably. You’ll be jiggled about a little more than in a standard Q5, but it never feels like a firm sports car. Add in the excellent refinement, and the SQ5 makes a very solid case for itself as a capable long-distance machine.

From behind the wheel, you get the sense that this car is trying hard to hide its sporting potential, and the same could be said of its exterior styling.

A couple of subtle S badges, large 20-inch alloy wheels and a slightly extended rear spoiler are the only changes over the standard model – as well as the trademark silver mirrors.

Funnily enough, the way the car looks is a perfect metaphor for how it drives. This definitely isn’t a pumped-up, loud and stiffly sprung Q5 for enthusiasts – it’s a rapid, capable soft-roader.