The new Audi SQ5 boasts 349bhp from its TFSI engine, but has the switch to petrol dented the hot SUV's appeal? We drive it in the UK... 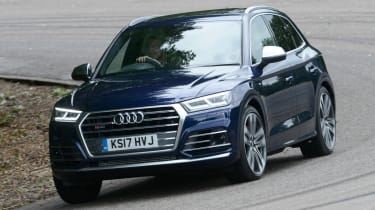 The Audi SQ5 excels when it comes to interior quality, refinement and outright pace, and the practical body means it makes a great family car. However it’s not particularly exciting to drive, nor is the petrol engine as economical as the previous-generation diesel version. It’s also quite pricey, especially if you tick any boxes on the options list - a Mercedes-AMG GLC 43 is better value, more fun to drive and just as refined at high speeds.

Just days after our first drive of the new Audi SQ5 in Germany, we’ve managed to get our hands on a UK model here in Britain. The original hot SUV accounted for as many as one in five of all Q5 sales, despite its hefty price and high running costs, but how will the new one fare on our notoriously broken roads?

One look at the huge 21-inch alloy wheels fitted to our test car (a £1,500 extra) and you might be thinking that there’s no way this sporty Audi SUV can ride well on UK tarmac. But there’s more to the SQ5 than meets the eye. 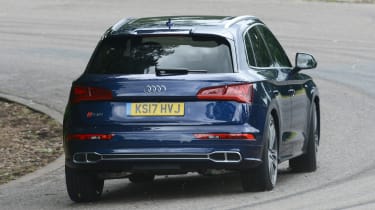 While the SQ5 feels unsettled at speed - just like its Q5 brother - it actually handles pretty well around town, and soaks up potholes much better than you might imagine. It’s still no Mercedes GLC, but the Audi is calm and quiet at cruising speeds, too, helping it feel relaxed on longer journeys.

That’s if you want it to be, of course - this is a performance car after all. A TDI diesel version will replace the existing car later in the year, but the new SQ5 launches with a ‘cleaner’ new petrol engine to begin with. The turbocharged V6 gets 349bhp and 500Nm of torque, and with a heavy right foot it wakes up with a roar. It’s not the most characterful motor, though: the Jaguar F-Pace’s V6 is sweeter.

The old SQ5 TDI continually shocked and stunned with its seemingly endless wave of torque, but the more frantic petrol engine in the second-generation car needs to be worked much harder for the same returns. Performance isn’t lacking, however, as the SQ5 takes just 5.4 seconds to go from 0-62mph. The eight-speed automatic gearbox is up to the task, shifting quickly when you’re accelerating. It’s not as responsive as a dual-clutch box when you’re driving normally, feeling reluctant to change down when you really need it to. 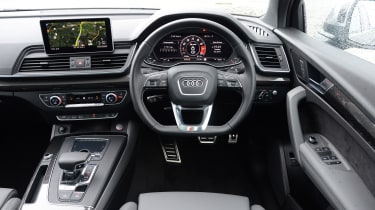 Sadly, even though the Audi is very quick in a straight line, it’s not particularly agile in the corners. The steering is light and has little feedback, and it often feels as though the wheels are moving around but there’s nothing coming back through the steering.

There’s more than a touch of roll as you’re cornering quickly, but you can select a ‘Dynamic’ mode on cars with optional adaptive air suspension that lowers the SQ5 by 15mm, helping to reduce unwanted sway. Our car wasn’t fitted with that system, but it did have a £1,200 Sport differential that electronically distributes torque to each wheel where it’s needed most. 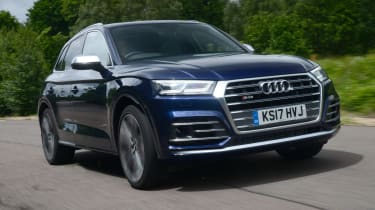 It forces the car to take a tighter line through corners, but the SQ5 still isn’t particularly fun to drive. There’s loads of grip from the rear-biased quattro all-wheel-drive system, but both the Porsche Macan and Jaguar F-Pace are more agile.

Where the Audi excels is with its superb interior. The neat, clean design and high-quality materials mean it’s one of the best in its class, although for this price the hard plastic on the doors is a bit of a let-down. Audi is a leader on in-car tech too, with Audi’s 12.3-inch Virtual Cockpit dials displaying everything you could need right in front of your eyes. The responsive and easy-to use 8.3-inch infotainment system looks great. 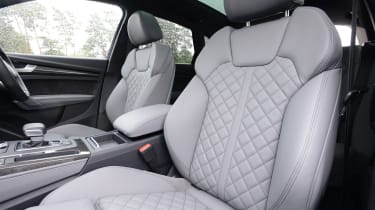 The seats are plush and comfortable, while there’s plenty of space in the back for passengers as well. However the driving position feels a little off, as you sit quite high up and the pedals feel too close to the steering wheel, so you end up sitting in a slightly unnatural fashion.

The SQ5 is just as practical as the normal Q5, with a big, wide 610-litre boot that expands to 1,550 litres with the rear seats folded down. That’s about on a par with the Mercedes GLC, which has less space with the seats upright (550 litres) but more with them down (1,600 litres).

From the outside, there are a few tell-tale signs that this is no ordinary Q5. The body is covered in S-specific details like the revised air inlets, bespoke diffuser and honeycomb grille, while subtle V6 T badges on the wings further hint at this car’s extraordinary talents. Standard equipment includes 20-inch alloys, LED lights, a DAB radio, three-zone climate control and a suite of safety kit including auto city braking and all-around parking sensors. It’s a decent list, but you’d expect that at this price – and the options list can see that figure quickly rocket.