Our fastest first drive ever, in the ultimate Continental GT 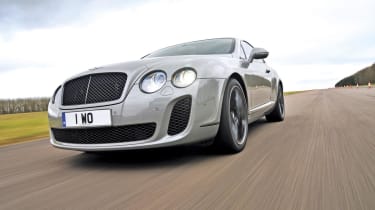 A top speed of 200mph-plus may not seem relevant on the UK’s congested roads, but for this ultimate Bentley, the milestone offers more than just bragging rights. The Supersports is by far the most driver-oriented Continental GT, mostly because of the tweaks to ensure stability and comfort at very high speeds. The lower kerbweight, wider track, new gearbox and extra power all help ensure this car performs really strongly at the legal limit, too! Plus, it’s refined and responsive, and in the colour scheme of our model, has no problem turning heads.

So this is it. The throttle is pinned to the floor and the Bentley is still accelerating. There’s a mile of test track yet to go, so all we can do is grip the leather-bound steering wheel and wait...

As the speedometer flashes through 160mph, the growl of the Continental Supersports’ huge exhausts gives way to the roar of the tyres on broken concrete. We’re in fifth, and the 6.0-litre W12 engine nudges the rev limiter, sending a shudder down the car’s body. For a fraction of a second, we are in performance limbo – neither accelerating, nor slowing down – then sixth slots home with a jolt and our pace starts to climb again. Time seems to drag as the brightly illuminated instruments record 170mph – fast enough to see us cover a mile in about 17 seconds.

Our target is 200mph, but we’re fast running out of tarmac on our empty runway test track. Another two seconds pass and we really are short of space... Time to hit the carbon ceramic brakes and have another go.

But before we do, we should explain exactly why we are at the Bruntingthorpe proving ground in Leicestershire. The Continental Supersports is the UK’s fastest, most powerful production car. Not only is it built in Britain, it’s also one of only a handful of machines to boast a top speed in excess of 200mph. Today, we are putting that claim to the test, and seeing exactly what benefits this high state of tune brings drivers on the road.

Bentley says the two-seater will accelerate to a top speed of exactly 204mph, while 0-60mph should take only 3.8 seconds. To help it deliver, the Supersports is equipped with uprated brakes and suspension. It also features a new Quickshift automatic gearbox, as well as a revised four-wheel-drive system that sends more of the car’s power to the rear wheels. These changes are subtle, but really important, as they promise to improve acceleration and make the car feel more responsive.

A weight-saving programme sees the rear seats removed and the addition of lightweight extras, including carbon fibre buckets. On the outside, there is a muscular bodykit, which incorporates wider side sills, plus flared wheelarches. A new aerodynamic undertray also features, alongside enormous twin exhaust tailpipes.

Our car was finished in stylish metallic grey paint, and wore 20-inch, 10-spoke alloys in black. A new smoked steel trim is applied to the grille, headlamp bezels and window trims to complete the look.

At the front is a host of intakes, while twin bonnet vents help feed 10 per cent more air to the uprated twin-turbo W12. The engine offers increased boost pressure, and has 621bhp at 6,000rpm – that’s 21bhp more than the Continental GT Speed.

It also serves up a staggering 800Nm of torque. The track is clear, so we decide to try again. The speedo reads 120mph at the quarter mile after a little over 13 seconds – and things start to get more involving. We take a line next to the trees in an attempt to find shelter from a 25mph headwind. Even at this speed, the car still feels nimble – despite its 2,240kg bulk.

We hit 150mph in fourth gear – it feels much like 120mph, but noisier. As we pass the slight hill in the middle of Bruntingthorpe’s runway, though, it’s all change.

The Supersports is travelling at 160mph as we exit the shelter of the trees, and are immediately buffeted by strong winds. Our speed climbs to 170mph, and the air is passing over the body at nearly 200mph. That’s as fast as Concorde on take-off – and it causes the car to make constant, yet tiny changes in direction.

It’s important not to overdrive by attempting to correct these movements with the steering. There’s easily enough space to let the Conti do its thing. Trying to control or correct the direction of travel could quickly get you into serious trouble.

We’re feeling more confident about the brakes’ performance, so we push deeper towards the end of the runway, slamming on the pedal rather than squeezing it, as we finally run out of road.

The nose dives into the tarmac and the car squirms as the speed is quickly scrubbed off. But we still weren’t fast enough.

For a final run, we inflate the tyres to 55psi at the front and 42psi at the rear. We also switch off the lights and the air-conditioning to help save power, and make a standing start.

One thing that never ceases to amaze is this Bentley’s pace off the line. In real world conditions, the two-door is simply amazing.

Once again, though, the headwind blunts our acceleration. The test gear records our true speed: 174mph, 175mph, 175.8mph… And that’s it.

We fall short of the 200mph target. The wind is too strong, the runway too short and it would take a brave person to push harder. Nevertheless, we have been amazed by the Conti’s stability and endurance. You get the sense it would take this punishment lap after lap. Good news – with more favourable conditions, we would love to try for 200mph again.