The Continental GT Convertible is the world's fastest four-seat soft-top, and thanks to Bentley's craftsmanship the most luxurious too 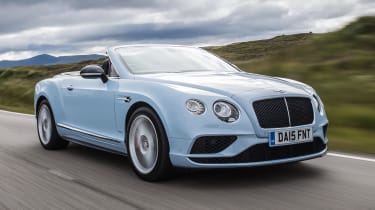 For the ultimate wind in your hair experience, look no further than the Bentley Continental GT Convertible. With a top speed of 203mph in Speed trim, the W12 6.0-litre turbocharged machine is the world's fastest four-seat convertible, although the smaller 4.0-litre twin-turbo V8 S is our pick as it offers nearly the same amount of performance, better fuel returns and arguably a better soundtrack.

Bentley has revised the car with a mid-life facelift that includes some minor interior and exterior design tweaks, introduced a range of new options and improved the performance and economy of the standard W12 engine.

However, it’s still the attention to detail that sets the Continental GT Convertible apart from its rivals, with a beautifully crafted interior that's a joy to look at and supremely comfortable to sit in. And despite its massive bulk - the car tips the scales at 2.5 tonnes - it's also surprisingly rewarding to drive, especially in V8 S mode.

It’ll never be a sharp-handling sports car, but with lowered suspension and tweaked steering the V8 S is a car that’s fun to drive fast, yet with all the relaxing cruising traits Bentleys are famous for.

The W12 engine isn't exactly environmentally friendly, yet constant development has made sure that it's more fuel efficient. Like the V8, the W12 features cylinder deactivation tech - so runs on a bank of six when cruising under low load (but the Speed model doesn’t have this function).  With all 12 cylinders firing it’s incredibly powerful, delivering huge amounts of torque and acceleration. Power is up by 15bhp over the old model to 590bhp, while torque is raised by 20NM to 720NM – providing a little more distance between it and the V8, which in S guise has 520bhp and 680NM. 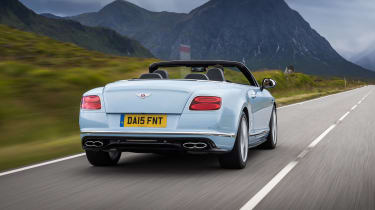 The V8 is more economical, yet delivers similar performance. It also has a more characterful engine note too, though the seismic rumble of the W12 is a little more unique and awe inspiring– either way with the roof down they both sound great. Whichever engine you choose, the car has four driving modes, from comfort to sport. In comfort the car rides smoothly over bumps in the road, while in sport the chassis stiffens up, improving the accuracy of the steering. The car is best left in the middle setting as this provides the best balance of handling and comfort.

Impressively, the 2.5 ton car seems to shrink around you on winding roads, and it's nowhere near as intimidating to drive quickly as its awesome performance figures suggest. The V8 S and W12 Speed also have lower stiffened suspension for tighter body control. Though they are still no sports car – the sheer bulk of the Continental GT Convertible means that there is only so much you can ask of its chassis.

At full throttle, the W12 powered model will race from 0-62mph in just 4.7 seconds and on to a top speed of 195mph. The Speed actually tops out at 203mph, making it the fastest four-seat convertible on the market. Trouble is it consumes as much as a gallon of fuel every three miles. Drive very carefully in the W12 and you might just scrape 19.9 mpg.

The V8 is better, with a combined figure of 25.9mpg, although that's still nothing to write home about. Really though, fuel bills aren’t a major concern to buyers of the car.  What’s more important is the range and the V8 should be able to do an extra 100 miles over the W12 between fill ups. You can also expect to spend at least £2,000 a year on servicing.  However, equipment levels are impressive with every car getting a peerless interior plus the latest electronic tech including a touchscreen infotainment system. 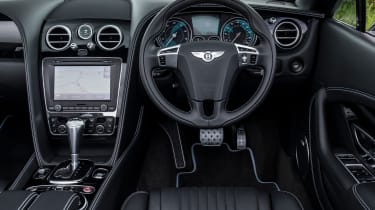 The Bentley Continental GT Convertible may look very similar to its predecessor, but every body panel is different. It's also wider and has a longer wheelbase. A mid-life facelift has freshened the exterior with new front and back bumpers, a more pronounced bootlip spoiler, flying B badges on the wings and a rear diffuser on the V8 S and Speed models. Inside there’s thinner fluting on the seats, a new clock and some redesigned dials. Options now include a wi-fi hot spot, semi Aniline Leather and a sports steering wheel.

Our favourite model, the V8 S, adds a few subtle spoilers, but they do nothing to detract from the classy look of the car. The fabric folding roof blends into the bodywork perfectly and, if you look closely at the material, there's not a thread out of place. Inside, you'll see why Bentley has such a special reputation.

Wood veneers are flawless, and the hand-stitched leather seats show off a skill that would put a Savile Row tailor to shame. There's no shortage of hi-tech toys to play with, including a Google-based sat-nav system that offers satellite imagery of your location, making it even easier to follow. 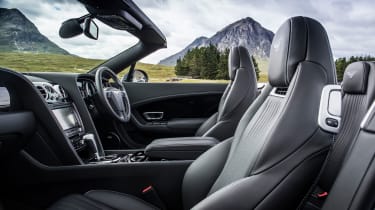 You really can take the family for a spin in the GT Convertible. The rear seats are only really big enough for kids and if you're planning a week away, it's worth considering a courier to take your luggage to your destination for you.

At just 235 litres, the boot is only really big enough for a couple of small bags. That aside, there's lots of storage space up front and the glovebox is a reasonable size too.

The W12 engine might be big, but it's also bombproof. During its development, it was forced through a test that saw it run at full power for 24 hours while rotating on a giant spit. It passed with flying colours. 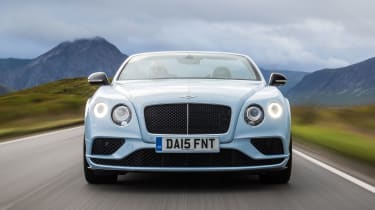 You can expect similar reliability from the twin-turbo V8, which was co-developed with Audi. The heavy duty gearbox has no known problems, while the standard of quality inside means it will look as fresh as the day you bought it, even a decade on.

Safety is first rate, thanks to plenty of airbags and a robust construction.