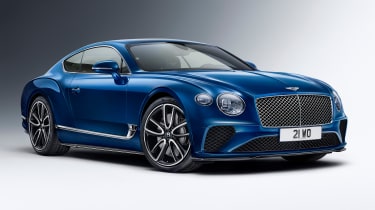 Bentley has added a new carbon fibre styling package to both the Continental GT and Bentayga’s extensive lists of customisation options. The upgrade will cost roughly £8,500 on the coupe and £17,000 on the SUV, raising the two cars’ base-prices to around £160,000 and £140,000 respectively.

Both cars get new rear spoilers, with the coupe receiving a low-level lip for the boot-lid and the SUV gaining an enormous bi-plane wing for its tailgate. There’s a smattering of newly minted metallic badging, too, and buyers can choose to have both cars’ front air blades, wing vents and mirror caps in the same carbon fibre finish.

Bentley says its development programme for the aerodynamic upgrades has been rigorous, with each vehicle being subject to 100,000km (around 62,000 miles) of testing. This is to make sure the spitter won’t be ripped away from the bumper if the car strikes a kerb, or that the side skirts won’t rattle their way loose over rough roads.

Each car has also been tested in computer simulations, in a wind tunnel and on the track to ensure the upgrades don’t have a negative impact on either car’s handling and stability.

The styling package is available to order now on any new Continental GT or Bentayga, with deliveries expected shortly after the government travel restrictions have lifted. However, if you’re lucky enough to own either vehicle, Bentley will also retrofit the package to your car at any of its UK retailers.

Do you like the look of Bentley’s new carbon fibre styling pack? Let us know in the comments section below…