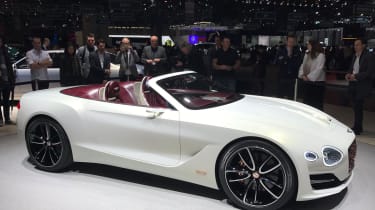 Bentley has revealed an all-electric concept car called the EXP 12 Speed 6e, which has been designed to show how a future EV from the brand could look. Bentley will also use the concept to get feedback from its customers about an upcoming luxury electric car.

It’s based on the previous EXP 10 Speed 6 concept that was shown at the 2015 Geneva Motor Show, but this time it’s a convertible and features a high-performance electric powertrain with a range of around 310 miles.

The design of the EXP 12 Speed 6e concept is similar to the previous EXP 10 concept, featuring a large grille with a 6 inside it, plus deeply sculpted doors and a vented bonnet. 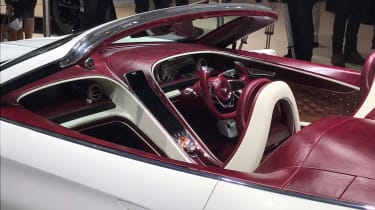 Twin headlights and large alloy wheels also mirror the previous concept, although the new model features tiny cameras rather than door mirrors - and of course there’s no roof.

The interior is typically opulent, with a solid glass centre console that curves up into a high-resolution display screen on the dashboard. The steering wheel has no top section, giving a better view of the digital instrument cluster. There are two buttons on top - one gives a performance boost, while the other limits the power for use around town. 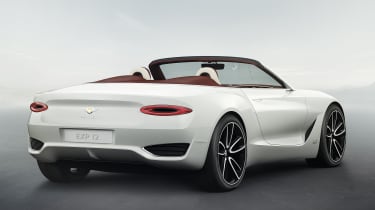 There are no details on the powertrain that the concept uses, but it’s expected that the upcoming Bentley EV will use the same running gear as the Porsche Mission E.

Both will feature fast-charging tech that can boost the battery to 80 per cent capacity in 15 minutes using a high-performance charging network. The Mission E concept featured a 592bhp motor and four-wheel drive, for a 0-62mph time of just 3.5 seconds. Expect the Bentley version to be more focused on comfort than performance, though.

The concept shows us what all-electric Bentleys could look like in a few years, but for now the EV offering from the brand will be based around a plug-in hybrid system that will be offered on the Bentayga SUV in 2018.

Would you like to see an all-electric Bentley in the future? Let us know below...

Welcome to our Geneva Motor Show hub page, scroll down for all our Geneva content...
Classic electric car conversions boom in popularity