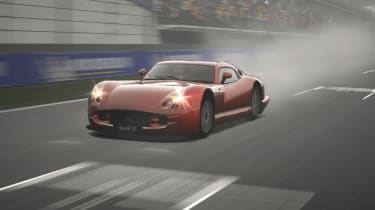 One car maker that gained international recognition thanks to its inclusion in the Gran Turismo series was TVR. The small Blackpool-based firm saw a spike in sales after its Griffith and Cerbera models appeared in Gran Turismo, and were helped by the fact they were some of the fastest cars in the game.

But the best was yet to come from TVR. In 1997, the firm built Project 7/12, a V12 supercar that was destined for sports car racing, but was canned before it could turn a wheel in anger. But one car survived, by this time called the Cerbera Speed 12, and its lairy, Bugatti Veyron-rivalling performance has been immortalised in every game since GT2.