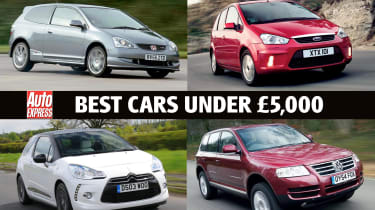 If you buy a brand new car you’ll probably get a refined drive, penny-saving economy and unshakeable reliability, but getting the best of these comes at a cost. Literally. The entry price to new car ownership - however reasonable a particular model may seem - can be off-putting for those with a limited budget, even once a good finance deal has lowered the initial outlay. That, of course, is where the second-hand car market can provide a sensible, alternative option when searching for a fresh set of wheels.

We searched high and low with a budget of £5,000, and discovered that each of the following used cars could be bought for less than that five grand figure. Quite extraordinary when you think that a factory-ordered, Dacia Sandero will cost you at least £6,995.

At the exciting end of the spectrum, we found a Honda Civic Type R from 2004 with 61,000 miles for just £4,500. That's a steal for one of the sweetest handling hot hatches ever.

There's also a sensible and practical 2011 Skoda Yeti, with 80,000 miles on the odometer. The Yeti might not be as fashionable as SUVs but it's no less capable and is great to drive.

Naturally we’d recommend a test drive and a full inspection, as even at this price bracket there’s no guarantee that a car has been properly maintained over the course of its life. But should it have roadworthy components and a clean service history, there’s no reason why a second-hand car can’t be bought in fine health.

If you’re willing to bide your time and keep a keen eye on the classifieds, you’ll be driving your own half-price hero before you know it. And for less than it costs to buy a bog standard Sandero, you’ll be laughing all the way into the sunset...

Scroll down to read more about our half-price heroes - all of which can be bought for less than £5,000 - or browse these other price brackets instead... 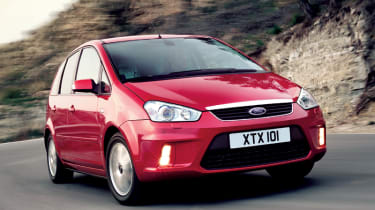 The Ford C-MAX shows how much the car market has changed in a relatively short space of time. Where once people carriers like this were the choice for those who needed space, a family SUV is now the go-to body style. However, as a used buy, the Ford still makes perfect sense.

Thanks to flexible seating, a big boot and easy access, it provides a practical solution to the problem of space on a £4,500 budget. The 1.8 petrol model isn’t quite as frugal as the diesels, but for shorter trips it’s fine, while Zetec spec looks good, offering essentials such as air-con. 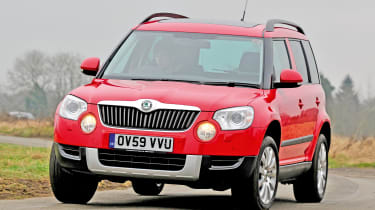 The Yeti shows how SUVs have supplanted MPVs like the Ford C-MAX – and what a car the Skoda is. It’s won numerous Auto Express awards because it blends practicality with the kind of individual but thoughtful design for which Skoda has become known, and in 2.0 TDI guise it mixes performance, economy and dependability.

Although the car feels a little dated next to Skoda’s current range, much of the tech is similar, so with nav and climate control available, there are enough features to complement the 416-litre boot and roomy cabin.

Ride quality and refinement are good, and the Skoda is one of the more precise-driving SUVs from this era. It has a charm and character missing from many SUVs, so with prices for respectable-mileage cars just under £5k, relatively low running costs make it a bargain. No wonder the Yeti is a former Auto Express Used Car of the Year. 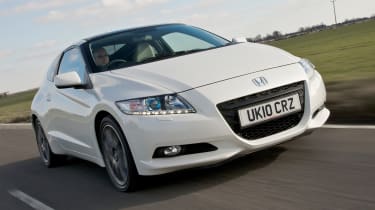 The sector is changing, but most hybrids are more focused on economy than sportiness. Not quite so with Honda’s CR-Z.

While the three-door hatch isn’t the most practical choice, the combination of petrol and electric power in a low-slung car that steers and handles well means there’s pace and composure. Yet with claims of more than 50mpg, that ability doesn’t necessarily come at the expense of economy. CO2 emissions of 117g/km mean road tax should be cheap, too.

There’s 225 litres of boot space, which isn’t great – but think of the CR-Z as more of a 2+2 coupé and it starts to make sense. Typically strong Honda reliability that’s been proven over time means it’ll be easy to live with, too. 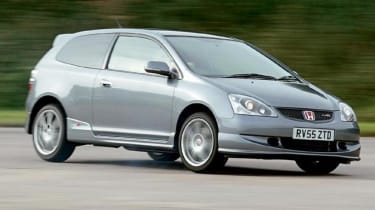 The Honda Civic Type R blew everyone away on its launch in 2001. Its 2.0-litre powerplant was – and still is – the star of the show. The VTEC unit produces 197bhp and screams to a race car-like 7,800rpm, delivering performance that destroyed the early-noughties hot hatch competition.

But while the engine defines the EP3 driving experience, there’s so much more to love; the chassis is agile, the steering sharp and the six-speed manual transmission one of the finest ever to grace a hot hatch.

High-mileage EP3s are now available for around £2,000, and roughly double that money should get you the keys to a very tidy version. There’s still plenty of choice out there, so you can afford to be picky. 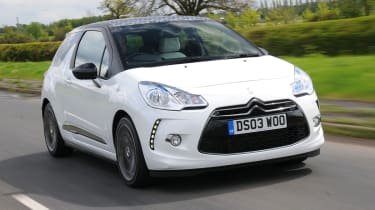 Performance car buyers often overlook the stylish DS3 THP DSport, but they’re missing out; the 1.6-litre turbo feels strong, backed up by a 0-60mph time of 7.2 seconds. The chassis strikes a good balance between ride and handling and the interior still looks fresh.

DS has now branched off from Citroen to become a more prestige brand, but the first iteration DS3 is still stylish as ever. 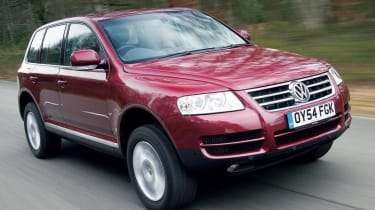 We wouldn’t usually recommend a V10 diesel SUV due to the complexity and cost if anything were to go wrong. But at this price, the once-expensive Touareg with huge performance looks something of a steal.

There’s a massive 750Nm of torque. Just watch for worn drivetrains, because this specialist model can be costly to fix. Yet it’s that specialist status that makes the VW so desirable, so if you’re after an individual and luxurious car that mixes effortless performance and half-decent efficiency, look no further. 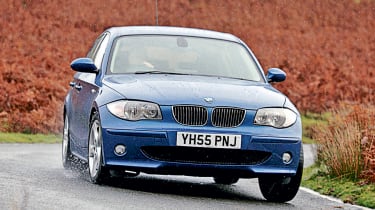 It might not be a conventional choice, but with five and six-cylinder hot hatches a dying breed, BMW’s 130i is a delightfully characterful performance car that’s now fallen to a temptingly cheap price point.

Less than £4,000 will get you the keys to the more practical and therefore more desirable five-door model in M Sport trim, so there’s enough left in the pot to budget for higher running costs due to the 261bhp in-line six-cylinder engine – but what an engine. There are no turbos, so it revs beautifully, with a musical soundtrack.

A front-engined, rear-wheel-drive layout means that, for a family hatch, the 1 Series is beautifully balanced, too. The icing on the cake is the 6.1-second 0-62mph time.