Few cars can match the thrills on offer from the stunning BMW 1-Series M Coupé. 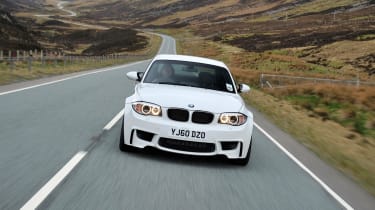 Make no mistake, the 1 Series M-Coupe is worthy of its prestigious badge. It returns BMW’s performance division to its roots by appealing to a more youthful audience while its compact dimensions and immersive driving experience are reminiscent of the original E30 M3. The only real departure is the grunty rather than revvy nature of its engine. But with turbo power being the future for M, that’s the way it’s going to be from now on. And based on how the 1-Series M Coupe performs – that’s no bad thing.

Let’s spare the suspense. You have already seen our verdict on BMW’s fastest ever 1-Series. The new M Coupé gets a full five stars.

And with that out of the way, we can find out why this is one of the best driver’s machines available – but is it really worthy of its £40,020 price tag, or its oh-so special M badge?

As with all M Cars, the engine takes centre stage. It’s not a bespoke unit. It’s the twin turbo, straight-six 3.0-litre from the Z4.

BMW’s M division has fettled it though. As a result, power is up to 335bhp but it’s the torque that really matters. With 450Nm available from just 1,500rpm and a peak of 500Nm – there is more in-gear grunt than even the M3’s V8 has.

You don’t have to rev the unit to get the best from it, which may not seem very M. But with turbo power being the future for the company’s engines, that’s the way it’s going to be from now on. The new M5 for example, gets a twin turbo V8.

BMW claims a top speed of 155mph and 0-62mph in 4.9 seconds, but the figures don’t show off this car’s true potential. This car feels much faster than its figures suggest, while the noise it makes is so magnificent no cliché does it justice.

So then, this 1-Series has M car performance, but what about M car looks?

Bazooka exhausts, big rims and bumpers that seem to have been intended for a larger vehicle help set it apart from the normal Coupé.

It sits lower too, and the track is wider to accommodate suspension that has been lifted straight from the M3. So too have the performance brakes and sport differential.

This shuffles torque between the rear wheels for maximum traction when exiting corners or, once you have exceeded the limits of grip, it delivers impressive tail slides.

Thankfully, the M1 is nothing but predictable, sending clear messages through to the driver - to the point that your backside can almost read the bumps in the road like braille.

All this makes the M1 a totally involving and therefore thoroughly delicious car to drive. However, it won’t suit everyone.

Some may find the ride too firm, while others may be disappointed there’s no paddle shift gearbox option - it’s manual only, though the short throw six-speed ‘box is a delight.

Finally, there’s no getting away from the fact most people will be able to cover ground faster and with more confidence in the all-wheel-drive Audi RS3.

But then the 1-Series M Coupe isn’t a car which flatters to deceive. What you get out is exactly what you put in. And that’s how it should be with an M car.

Not everything is perfect though. Sure, the interior is nicer than the normal Coupe’s. You get leather with Alcantara, bespoke dials, a chunky steering wheel and some M Sports seats, which are both supportive and comfy.

The rest of the rest of the car, however, does. And when you consider it’s 13 grand less than an M3 it starts to seem like a bit of a bargain.

Being smaller and therefore less practical does means it’s  more of a toy. But should you have the means – what a toy.

If you want one you’d better move quickly though as only 450 1 Series M Coupes will come to Britain. What's more most are already sold. And that brings us to our only true complaint – it’s a bit of a shame BMW has decided to bring such joy to so few.