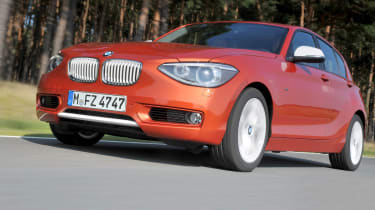 With a starting price of nearly £23,500, the 120d isn’t likely to be the best-selling 1 Series. Add the eight-speed auto, and the price moves further into 3 Series territory. However, it offers rapid acceleration and excellent economy, while the rest of the package has really moved on. We’d save £1,500 and go for the 118d, though.

Is this BMW the 1 for you? Last week, we drove the German company’s new 1 Series compact hatchback in petrol-engined 118i guise. Now, it’s the turn of the flagship 120d diesel.
Unlike the petrol line-up, the oil-burning range doesn’t come with completely new engines; the 2.0-litre is merely heavily revised. It gets a variable geometry turbo and new fuel injectors designed to improve response and efficiency.
Video: watch CarBuyer's video review of the BMW 1 Series
[[{"type":"media","view_mode":"content_narrow","fid":"69339","attributes":{"alt":"","class":"media-image"}}]]
The unit is 4bhp more powerful than before and has 30Nm more torque, with 181bhp and 380Nm respectively. It takes the 120d from 0-62mph in 7.2 seconds and on to a 142mph top speed – about as fast as a VW Golf GTI.
A GTI can’t return well over 60mpg, though, and nor does it emit 119g/km of CO2. Factor in a smooth sound, lots of mid-range punch and relaxed motorway manners, and buyers wanting a discreet alternative to a traditional hot hatch that won’t be too costly to run should look no further.

If you prefer not to stand out from the crowd, don’t order your 1 Series in Urban trim. It comes with bright white 17-inch alloy wheels, plus a white grille, wing mirrors and interior detailing, and is definitely a love it or hate it look. Better to go for the more subtle Sport specification, which offers dark accents and metallic grey wheels.
Our car had BMW’s new eight-speed automatic gearbox, which features steering wheel-mounted paddleshifters. It’s certainly slick and responsive, but at £1,600 it’s an option you would add only if you simply must have an auto. As for the rest of the 1 Series, there’s a lot to like. The new look is softer than before, while the cabin is a leap forward in quality, with lots of ‘big car’ options such as lane departure warning and road sign recognition.
One of the best features comes as standard. The ECO PRO driving mode reduces throttle response and limits the load put on the air-con for more efficiency. It works without you noticing, and the gains in range are displayed on the dash. It’s a pity the car doesn’t offer much more room in the back than before, despite being longer and wider. Still, the boot is bigger, so the BMW is a little more practical.
Plus, it’s even better to drive. With wider front and rear tracks, plus new front damper mountings, the 1 Series is stable yet has a much more comfortable ride.
Share this on TwitterShare this on FacebookEmail