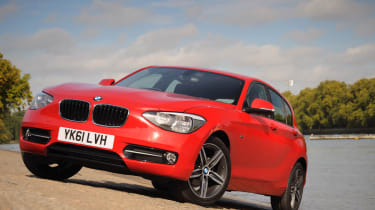 The new BMW 1 Series isn’t wildly different from the old car, but it’s a tried and tested formula that’s won a legion of fans. This new model will be hoping to match the 1.2 million sales racked up by the outgoing car, and with the most involving drive in its class, along with a much more comfortable ride and slightly more spacious cabin, it has everything it needs to match, or perhaps even better, the huge success of its predecessor.

The previous-generation BMW 1 Series sold in huge numbers, because it delivered driving thrills, a luxurious cabin and a fantastic range of engines.
But it wasn’t perfect – complaints included a stiff ride and cramped rear seats. So can the all-new model score top points in every category? We took to the roads in a UK-specification car for the first time to find out.
Video: watch CarBuyer's video review of the BMW 1 Series
[[{"type":"media","view_mode":"content_narrow","fid":"69339","attributes":{"alt":"","class":"media-image"}}]]
The new 1 Series gets a much smoother and classier look than the car it replaces, with flowing lines and curvaceous headlights replacing the bold and rigid shapes of the old model. The rear wheelarches are emphasised by character lines, while there’s a cleaner set of tail-lights, too.

Climb aboard, and you settle into a cabin that BMW claims is more spacious than the previous car’s. With a 30mm longer wheelbase, the engineers had some length to play with, but adults will still find the back a bit cramped. On the plus side, the boot space has been significantly increased, going from 330 to 360 litres.
Interior quality is top-notch. The switchgear is chunky and solid, and materials such as the soft-touch dashboard feel very upmarket. There’s plenty of advanced technology, including adaptive cruise control, lane assist and Internet access. Our Sport model featured Bluetooth, a 6.5-inch colour display, air-con and a leather-trimmed sports steering wheel as standard.
Under the bonnet of our car was a new 134bhp 1.6-litre twin-turbocharged petrol engine. This direct-injection unit produces 132g/km of CO2 and returns 49.6mpg fuel economy. On the move, it’s very smooth and gives a wide spread of torque, making for easy overtaking and relaxed driving around town.
There’s also a more powerful 170bhp version of this engine, and two diesels: an efficient 1.6 and a 184bhp 2.0-litre. Next year sees the addition of an ultra-frugal EfficientDynamics model to the range, offering tax-free emissions of only 99g/km.
However, all 1 Series have the fuel-saving ECO PRO mode, which dulls the throttle response and limits your use of the air-conditioning and the heated seats. According to BMW, this can improve fuel economy by up to 20 per cent.
But does the 1 Series still lead the class when it comes to driving dynamics? Front and rear tracks are wider than before, while the 50:50 weight distribution and rear-wheel-drive set-up remain.
It all adds up to a sharp and agile car that’s just as involving as its predecessor – despite the new electric power-steering system. BMW’s Drive Performance Control is standard on all models including ECO PRO. It gives the driver four modes to choose from – Comfort, the standard setting; and Sport, which sharpens steering, throttle and suspension. Sport+ allows more rear wheel slip.
The best news, though, has to be that the razor-sharp handling no longer comes at the expense of a comfortable ride – especially when in Comfort mode. It’s still firm, but the new 1 Series is far better at soaking up potholes and road imperfections than its predecessor. In Sport mode, the ride remains extremely compliant but vibrations from the roughest roads are more noticeable inside.
This level of comfort, along with a cabin that’s well insulated from wind and road noise, makes the small BMW an appealing long-distance car, in a way the old model could never be.
BMW has addressed the two major complaints associated with the 1 Series by freeing up more space in the cabin and carefully tuning the ride for UK roads. But there’s still something that will make people look elsewhere – the price. The cheapest model currently costs £19,375, while the most expensive 120d Sport will set you back £24,720.
Share this on TwitterShare this on FacebookEmail