A BMW TV advert for the company’s xDrive four-wheel drive system has been banned in its current form on UK television, after the Advertising Standards Authority (ASA) said it “condoned faster, dangerous and irresponsible driving”.

The minute-long ad (above) shows a variety of xDrive-equipped BMWs being driven off-road on snow and mud, and also contains footage of models being driven on the road in wet weather conditions.

Backed by Blur’s Song 2, a rousing rock anthem, the ASA said while it acknowledged that “some of the scenes took place off public roads”, it considered the off-road scenes were “not significantly different to environments that viewers might encounter.” 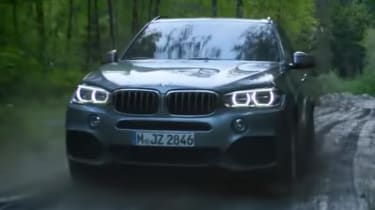 The ASA continued: “The demonstration of the capability of the xDrive system condoned faster, dangerous and irresponsible driving… presented in the context of excitement”. It also highlighted an instance of an X5 “appearing to skid on a dirt trail.”

BMW contested this interpretation of the ‘skid’, arguing the X5 demonstrated “a slight reduction in traction”, as the technical ability of the xDrive system was highlighted. BMW also argued the cars were driven in a safe and responsible manner.

The car maker added that Blur’s Song 2 was selected to appeal to the advert’s target audience, and was unlikely to imply the cars were driven at a high speed.

Despite these points – and the fact just one person out of the estimated 9.3 million who saw the advert complained - the ASA deemed BMW’s advertisement breached three advertising codes.

The rules in question stipulate motoring adverts must not encourage “dangerous, competitive, inconsiderate or irresponsible driving” and “must not demonstrate power, acceleration or handling characteristics except in a clear context of safety”.