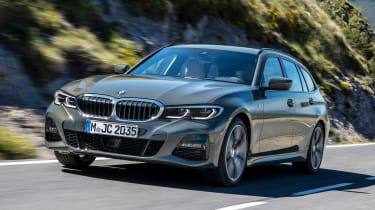 The new BMW 3 Series Touring is now on sale in the UK, with the latest-generation estate bodied 3 Series priced from £35,505 and a line-up of nine models confirmed - including a plug-in hybrid option due in 2020.

Globally, cars like this are beginning to feel the strain of the ever growing SUV market, but the newcomer remains an important part of BMW’s business. After all, the outgoing 3 Series was still BMW's second biggest seller in its final year on sale and accounted for 17 per cent of all deliveries in 2018. Look specifically at the estate model and BMW claims 1.7 million have been shifted since its introduction in 1987, half a million of which can be put down to the outgoing version.

Next summer the plug-in 330e joins the line-up. It combines the 181bhp engine of the 320i with a battery and electric motor combination worth an extra 108bhp, with maximum output claimed at 288bhp. BMW claims 156.9mpg is possible, with 0-62mph claimed in 6.1 seconds.

SE, Sport and M Sport trim cars will be offerered, with the UK gaining a new M Sport Plus Edition trim earmarked for the UK market. 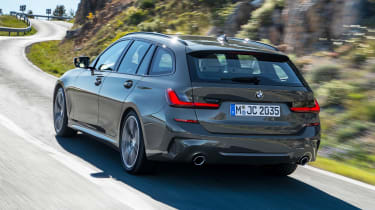 From a design perspective the 3 Series Touring adds a conventional estate rear end onto the saloon - there’s little evidence of BMW being tempted to make the newcomer rakish as per the latest industry trend. Rearward visibility should be improved over the outgoing model, given BMW claims that the rear window is 20mm wider and now extends further down the tailgate. SE, Sport and M Sport trims have been confirmed, meaning a full range of sensible and sporty looking offerings will be available from launch.

There’s also a new M Sport Plus Edition model for the UK market, which is offered in three exclusive colours, gets black mirror caps, gloss black 19-inch M badged alloy wheels, and can be trimmed inside with high-gloss Aluminium fabric veneers.

Inside the cabin is almost lifted wholesale from the saloon. The dashboard and instrument panel layout is identical, but BMW says that the standard front seats have changed, while sports seats are equipped by default on Sport and M Sport versions of the car. SE and Sport cars use traditional dials and feature an 8.8-inch central display, but higher spec M Sport and M Sport Plus Edition cars get the full-size 12.3-inch central unit and a fully-digitalised instrument panel. 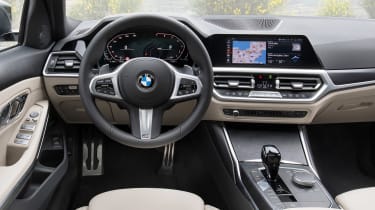 The boot is ultimately what people will buy this car for though. An automatic tailgate is standard on every model, and how far it opens can be adjusted through the iDrive infotainment system. The rear window can be opened separately, if necessary.

The boot opening sizes up at 112mm wider than its predecessor, and BMW has developed new optional ‘anti-slip’ rails, which extend upwards when the boot is closed to restrict cargo from moving around. Both the boot compartment cover and the partition net can be detached separately and stowed in dedicated spaces beneath the boot floor.

As for space, by default the 3 Series Touring fields 500 litres of room, which is an improvement of five litres over the old model. The rear bench folds 40:20:40, opening up a maximum capacity of 1,500 litres. An electronic tow bar is optional, and all but the petrol powered 320i Touring (1,600kg) boast a maximum braked towing capacity of 1,800kg.

The engine line-up comprises of seven choices - three of them diesel and three of them propelled by petrol. The base model is the four-cylinder turbocharged petrol 320i, developing 181bhp and capable of a claimed 41.5mpg and 0-62mph in 7.6 seconds. Elsewhere in the petrol fold there’s a more powerful four-cylinder 330i model, using the same engine but with power turned up to 254bhp. 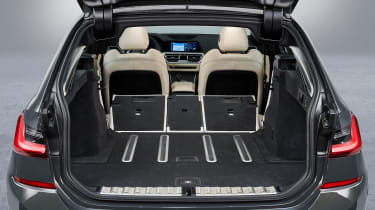 It’s almost certain that an M3 version of the new 3 Series Touring will not be developed. Instead, those after performance will be catered for through the M340i xDrive model, which uses a turbocharged straight-six with 369bhp and 500Nm of torque, sent to a rear-biased all-wheel-drive system. 0-62mph comes up in 4.5 seconds, with top speed limited to 155mph.

The diesel line-up kicks off with the 148bhp 318d, which BMW claims is capable of 53.3mpg. The 187bhp 320d model can be equipped with an xDrive all-wheel-drive system, as can the six-cylinder, 261bhp 330d. All versions, petrol or diesel, send power to an eight-speed automatic gearbox except for the rear-wheel-drive 320d, which is fitted with a six-speed manual transmission.

Buyers will have to wait until summer 2020 for the 330e Touring, which mates a four-cylinder turbo petrol engine to a battery and electric motor combination. 252bhp is available, as is all-electric running. The electric tech does impede practicality, however, but BMW has not confirmed the hit to the boot space in numbers.

Do you like the look of the new BMW 3 Series Touring estate? Let us know your thoughts below… 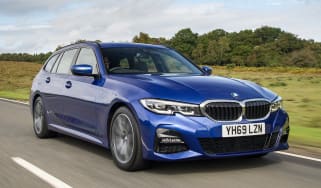 Is the new BMW 3 Series Touring estate as good as the excellent saloon? We drive it in 320d xDrive M Sport spec in the UK to find out...