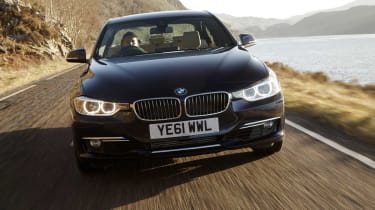 The runaway UK success story for the BMW 3 Series shows no sign of stopping. The new model is more spacious, cleaner and quieter than its predecessor, but as the scorching 335i proves, it’s also even more thrilling to drive when you up the pace. There’s only one problem for this car – the 181bhp 320d is cheaper, more efficient and almost as talented. As a junior version of the M3, though, the 335i is sensational. Just be careful with the extensive options list: our very well equipped test car came in at a hefty £49,860 in total.

Last year, the outgoing BMW 3 Series was still the eighth-best-selling car in Britain, despite launching seven years ago – proof that the UK is crucial to this model’s success. And to mark the arrival of the new 3 on UK roads, Auto Express has been given a world-exclusive first drive of the range-topping 335i.
This car is a sign of things to come: the next M3, due in 2013, will drop its V8 for a highly tuned six-cylinder and it’s likely to be loosely based on the 3.0-litre direct-injection turbo in the 335i.

Video: Watch CarBuyer's video review of the new 3 Series
[[{"type":"media","view_mode":"content_narrow","fid":"68815","attributes":{"alt":"","class":"media-image"}}]]
The straight-six is also fitted to the new 535i, but in the smaller 3 Series – which weighs 25kg less than its predecessor – its performance is magnified. This car does 0-62mph in 5.5 seconds.
Throttle response is instant, with no hint of turbo lag, and the engine revs freely to 7,000rpm. On part throttle there’s a subtle growl from the exhausts, but press on and there’s a thrilling mechanical crescendo as it nears the red line.
Settle to motorway cruising speeds and you’ll notice how refinement has improved. Noise from the tyres and engine is brilliantly suppressed – only wind noise from the A-pillars and wing mirrors is audible. With 400Nm of torque, this car is also happy to crawl around like a diesel in a high gear at low speeds.
Ditch the manual box in favour of the more efficient eight-speed auto (a £1,660 option) and the 335i will return 39.2mpg – that’s 6.7mpg more than the old car. The new 328i, with its 2.0-litre turbo, is 4.9mpg more economical and only six tenths slower from 0-62mph (with a time of 6.1 seconds), but it can’t match the smoothness and sound of the six-cylinder.
In auto mode, the box blurs the ratios perfectly. Use the paddles and it shifts in the blink of an eye – there’s barely any interruption to the power delivery. We think this set-up makes the case for heavier twin-clutch boxes questionable.
Show the all-new 3 Series a B-road and it’s even better balanced than before. The steering weight doesn’t varymassively as you load up the front tyres, but it’s so direct you can place the car precisely and it always feels light on its feet. The facelifted Audi A4 seems slow-witted by comparison.
Agility hasn’t come at the price of comfort, either. All models get a switch that allows you to toggle through Eco Pro, Comfort, Sport and Sport+ modes, tailoring the throttle, steering and skid-control response. Our car had Adaptive M Sport suspension, too, and even on its firmest setting, this £750 option takes the edge off bumps and keeps body roll well in check.