We drive the eco-special 3 Series - are the efficiency gains are worth the compromises on options and power? 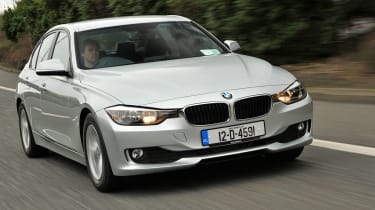 Priced identically to the 320d SE, the BMW 3 Series ED will be the pick of the range for those doing high mileages. If you want sporty alloys, you’ll have to go for the regular 320d, while the gains in efficiency over the standard model are marginal. But they add up to lower fuel and tax bills, plus there’s the bonus that the ED drives as well as any 3 Series.

This is the most efficient BMW 3 Series yet. The new EfficientDynamics model builds on the success of its predecessor, which was the biggest-selling 3 Series. Like that car, it’s based on the 320d, but boasts even better fuel economy and CO2 emissions. It’s exactly the same price as the 320d SE, too. So is there a catch?
Outside, there’s very little to distinguish the EfficientDynamics from other 3 Series trims. It does come with unique 16-inch alloys, wearing low-rolling-resistance tyres, whereas the SE features sportier 17-inch wheels.
Video: Watch CarBuyer's video review of the new 3 Series
[[{"type":"media","view_mode":"content_narrow","fid":"68815","attributes":{"alt":"","class":"media-image"}}]]
Yet unlike other models in the line-up, there’s no option to upgrade to bigger wheels. Also, the EfficientDynamics cannot be specified in M Sport trim. Inside, the ED is identical to the 3 Series SE, which means no standard leather trim.

Otherwise, there’s enough kit, including parking sensors, cruise and climate control, Bluetooth, plus automatic lights and wipers.
There’s a leather-trimmed steering wheel as well. Overall, the cabin is quite attractive, with metal highlights, and as in other new 3 Series, it’s more spacious than before.
The EfficientDynamics model rides better than the standard car, too, thanks to the high sidewalls of its 16-inch tyres: it really does glide over most surfaces. Only ridges that span the width of the road catch it out.
Road noise is low, yet the diesel engine is always vocal, which detracts from the luxury-car feel. As ever, the 3 Series loves a twisty road, and that doesn’t change in this eco special. It has great body control and superb agility.
BMW’s familiar slick six-speed manual gearbox is standard, but the gearing has been tweaked to enhance economy. The ECO PRO driving mode increases the efficiency of the air-con system and dulls throttle response a little.
It works well – so well that you often find yourself changing up earlier than you’d expect. You can also select Sport mode, which sharpens up the throttle and steering for when the mood takes you.
In contrast with the previous generation of EfficientDynamics 3 Series, the new car can be specified with an eight-speed automatic transmission, which operates smoothly.
BMW claims the manual will return average fuel economy of 68.9mpg and emit only 109g/km of CO2. However, the standard 320d claims 61.4mpg and 120g/km, yet is 20bhp more powerful.
The 320d EfficientDynamics will save a 40 per cent taxpayer £674 a year – that’s £56 a month – in tax. And in everyday driving, the reduced power of the ED isn’t noticeable, as it produces the same amount of torque as the SE. On paper, it is slower, but the difference is marginal in the real world.
For high-mileage company-car drivers – and even some private buyers who prioritise efficiency – the ED will be a no-brainer. For others, the standard 320d is a perfectly economical and capable all-rounder that can be ordered in more desirable M Sport trim.