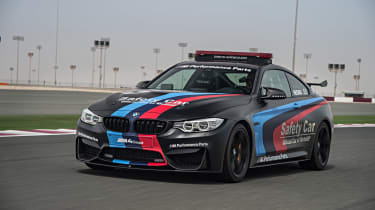 Water really is the giver of life to the M4, the system not just adding to the performance and power, but also improving emissions and economy. It’s no surprise that the rest of BMW’s engineers are knocking on the M Division’s door wanting to try the technology. It’s relatively simple, needing a small five litre boot-mounted tank and some distilled water every fifth fuel fill up or so. It’ll add little to the cost, too, but the potential savings could be very significant.

Look past the colourful stickers and roof-mounted lights and this BMW M4 MotoGP Safety Car features some very clever technology under its bonnet. Water injection; a system BMW M’s engineers have borrowed from a banned idea from motorsport and are experimenting with it on the M4.

Bravely, they’re doing so in a very public arena, because the BMW M4 Safety Car’s experimental engine is charged with the task of rolling out in front of MotoGP’s two-wheeled warriors whenever one of them gets it a bit wrong. In front of a huge global television audience. 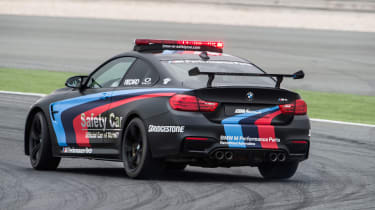 No pressure then, and it’s a similar story for us. This one-off safety car was needed later in the weekend to undertake its biker-herding duties, yet BMW let us take it out onto Qatar’s Losail circuit to see what the water injection system is all about.

Don’t think that the water is injected into the engine itself, that’d be catastrophic for the M4’s TwinPower turbocharged 3.0-litre six-cylinder unit. No, the water here is injected into the turbo system. Doing so allows the air in the pre-combustion collector to be cooled, thus increasing its density and oxygen content.

The result is as simple as the concept really, a bigger bang, the benefits of the improved thermal management also being greater economy and less emissions. 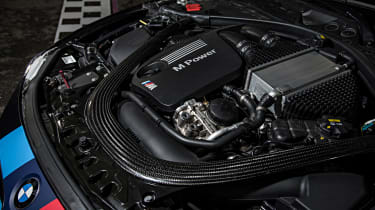 It’s little wonder BMW M’s boss Frank van Meel is so excited by this new technology, admitting that they’ve been genuinely surprised by the benefits it’s brought. Officially BMW M is saying the improvements are in the region of 8 per cent (459bhp), but Meel says the output in the M4 might now be as high as 500bhp. That a sizeable leap from the 425bhp of the standard car.

In the M4, unsurprisingly, it’s set up to improve power at the top end, the system only working above 5,000rpm. There’s more performance, that obvious, but there’s a greater civility to the engine’s response across the entire rev range. That makes for not just a faster M4, but an easier one to live with, too.

The steering response is also improved, the M4’s already quick turn in gaining speed and some feel at the steering wheel’s rim thanks to the addition of KW coil-over suspension. Add the tight hold of the Recaro bucket seats and six-point harnesses and the M4 is a more immediate, exciting car, that sounds glorious too thanks to the removal of the central silencer from the M Performance Parts exhaust. 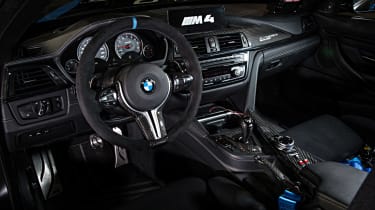 Switch all the electronic stability and traction control systems off, as the M4 Safety Car’s usual driver Mike LaFuente does, and it’s can be slid around the track at will, and with far greater ease than its road-car relation.

That might be largely irrelevant for many M4 buyers, but for a small hardcore of BMW M enthusiasts that’ll appeal hugely. As will the rumour that the BMW M4 MotoGP Safety Car is a none-too-subtle hint at a possible M4 GTS special.