The BMW M4 GTS touches down in Britain, and the ultimate M car wows us all over again 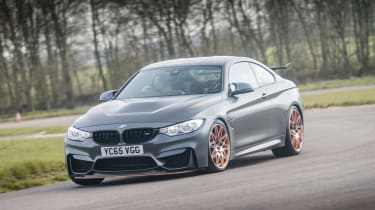 The fact the GTS costs twice as much to buy as a standard M4 is largely insignificant. The car is already sold out, but those who managed to get their hands on one can proudly announce they have the keys to the best BMW M car for a generation. It’s sharp, focused and fast, while the perfectly judged ride is merely the icing on this very expensive yet beautifully crafted cake.

We drove the amazing BMW M4 GTS on track a little while back, and while we were blown away by the sorted chassis and bonkers soundtrack. Now, though, we've finally given the car a go on British roads to find out if it performs as admirably on our pitted and scarred tarmac as it did on a silky-smooth Spanish circuit.

The M4 GTS is destined to be a rare car - only 30 are coming to the UK, out of just 700 in total. That certainly makes it exclusive enough to guarantee sky-high residual values - we expect plenty of these cars will be living the life of luxury in heated garages for most of the time. For those lucky owners who actually plan to drive the car, they are in for a treat.

Fire it up and the GTS sounds unlike any M car that has gone before it. The titanium exhaust is 7kg lighter than the standard set-up and it’s louder, too, with an addictive bark that amplifies as the revs rise. 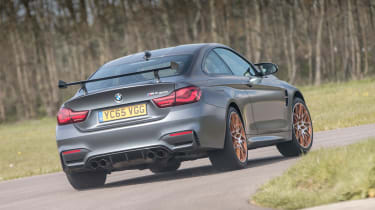 Under the bonnet sits a slightly tweaked version of the standard car’s 3.0-litre twin-turbo straight-six engine, with power turned up from 425bhp to 493bhp. This is achieved by employing the same clever water-injection technology first seen on the MotoGP M4 Safety Car we drove in April last year. It works by spraying water into the air chamber to reduce intake temperatures, allowing higher boost pressures and more power.

As a result, the M4 GTS rockets from 0-62mph in just 3.8 seconds and on to a top speed of 190mph. Traction is impressive, too, which isn’t something that could be said of the standard car.

Along with the engine upgrades, BMW has revised the chassis, springs and dampers to provide a more rewarding driving experience. The front track has been widened, and adjustable coilovers sit in place of the normal springs. The anti-roll bars are specially made for this car, too. 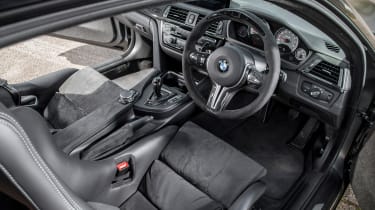 On track, we decided the range-topping M4 was a “deeply impressive and hugely entertaining car” that felt “a world apart from the base model”. Yet we were concerned about whether it could cope with the ruts and ridges on UK roads.

Thankfully, it can. It’s actually the most composed M4 to date, offering poise and adjustability on all surfaces. While the normal coupé had a tendency to bite with snap oversteer, the GTS just grips.

It’s even comfortable on longer motorway journeys. Some track-focused road cars will send shakes down your spine every time you hit a tiny pothole, but the M4 is supple in comparison. Few owners will use the BMW to commute, although it’s a perfectly feasible option should the need ever arise. 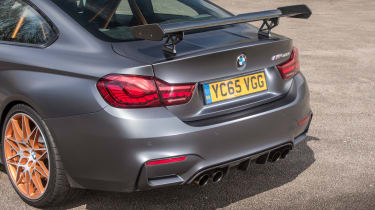 Carbon-ceramic brakes have been added to the package, too, permitting fade-free stopping power corner after corner. There’s plenty of feel through the pedal, which lets you scrub speed at an alarming rate.

Every inch of the GTS appears to have been aimed at keen drivers. So it may come as a surprise to learn that this very special car is only available with BMW’s seven-speed dual-clutch auto gearbox.

Still, the shifts are instant and immersing, giving you complete control in Sport or Sport+ mode. Plus, it’s remarkably characterful, and we doubt any owner will mourn the lack of a manual gearbox when they see how perfectly the DCT suits the car. 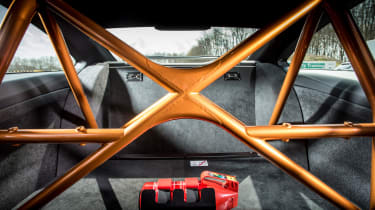 Inside, the fixed bucket seats hold you firmly in place, while the thick Alcantara steering wheel feels great. Rear seats have been thrown out to reduce weight, as have the standard bonnet, roof and tailgate. All three have been replaced with carbon-fibre alternatives, so the GTS weighs around 30kg less than the standard M4.