592bhp M5 had to be refuelled five times mid-drift, and managed 232 miles purely sideways over 8-hours

BMW has launched its new, 592bhp M5 in the best way possible - by setting a world record with it. The carmaker has more than doubled the record for the longest drift, managing 232.5 miles in eight hours.

The previous record was a mere 89.55 miles, set back in 2014 by a Toyota GT 86. BMW's drift marathon was completed by racing driver John Schwartz, who along with precision driver Matt Mullins also broke the record for the longest twin vehicle drift, at 49.25 miles over one hour. 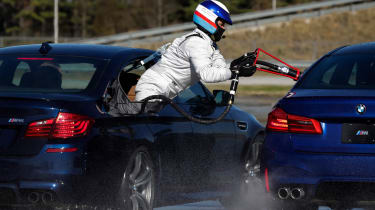 During the record attempt, where the 2018 M5 averaged 29mph, the car needed to be refueled five times. As the video (above) shows, the support M5 featured a custom refuelling system that allowed an engineer to fill the new M5's tank on the move.

The record attempt was done on a wet skid pan, but other than a custom fuel tank the M5 was essentially a stock customer model. Schwartz, whose day jobs include precision driving instruction, said the new record was "a big win all around".

How impressive is BMW's new drifting world record? Let us know what you think of it in the comments!