BMW has refreshed its flagship 7 Series, but are the updates enough to keep it competitive with rivals from Audi and Mercedes? 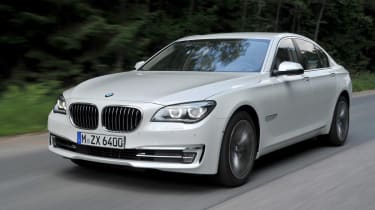 With more gadgetry than ever and a wider range of powerful engines, the 7 Series feels like a proper BMW flagship. But it doesn’t really look like one, and the driving experience is rather confused. A Mercedes S-Class is still better to travel in, despite attempts to make the 7 Series more comfortable. And that’s its biggest problem: it’s not as good an all-rounder as the S-Class. The Mercedes is still the best luxury limo on sale, even though an all-new model is due this year.

Gone are the days when the only way to flaunt your wealth was a big, luxurious executive saloon car: now everyone wants an imposing and sumptuous high-riding SUV instead. So, is there still a place for the BMW 7 Series?

UK sales are tiny compared to the popular X5 and X6, but in Russia, China and the US, a traditional saloon flagship still carries kudos. Those markets are the main reason for this updated 7 Series.

Rather than a dramatic new look, the car gets LED headlights, as well as a new grille and front bumper. Even head of BMW Design, Adrian Van Hooydonk, plays the styling down: “The revised 7 Series has a strong character, but is definitely not flashy,” he says.

The flashy part happens inside. There’s more soundproofing, a new 16-speaker Bang & Olufsen stereo, on-board Internet and night vision, which can spot pedestrians in the dark.

Other gizmos include 3D sat-nav, a bootlid that opens when you swing your foot under the bumper and dials that change their appearance depending on whether you’re driving in Eco Pro, Comfort or Sport mode.

BMW has re-engineered the rear suspension, too, by adding new dampers, bushes and self-levelling air-suspension. All models get electric power-steering, stop-start and an eight-speed auto as standard.

It feels incredibly fast, with a lovely V8 burbling sound under acceleration that fades away almost completely when it settles down to a motorway cruise.

The eight-speed auto shifts quickly and smoothly, too, and if you activate Sport or Sport+ modes, the steering is sharp, the body barely rolls and the car feels much smaller and more agile.

The problem comes when you select Comfort or Comfort+ and realise the suspension isn’t soft enough. It’s better than the old car’s, but still feels too firm on bad roads. A Mercedes S-Class is a much more relaxing drive.

Ultimately, the 750i lacks the style of an Audi A8, the presence and usability of the BMW X5 or the all-round ability of an S-Class.