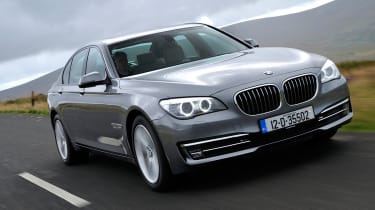 The updated BMW 7 Series may not look very new at first, but the changes under the skin are significant. The best-seller is likely to remain the accomplished 730d, which is both more powerful and more economical than before. All versions of the 7 Series are more comfortable than ever and the luxurious interior now features BMW's latest technology - plus a few bespoke options.

Not that you'd know it, but you're looking at the considerably overhauled BMW 7 Series. The best-selling 730d model professes to be "the cleanest diesel in the luxury segment" with lower emissions and fuel consumption then before - but will that be enough to compete with the Mercedes S-Class and Audi A8?

Efficiency gains across the 7 Series line-up are largely down to the acclaimed eight-speed automatic gearbox, which is now fitted as standard. Not only do the extra ratios enhance efficiency (the previous 730d made do with a six-speed automatic), the transmission also enables a stop-start function.

Other fuel-saving measures include electric power steering, brake energy recuperation and BMW's Driving Experience Control switch, which includes an Eco Pro mode - as found across the rest of the BMW line-up already. The result is a phenomenal 17 per cent improvement, with emissions of 148g/km and an average fuel economy figure of 50.4mpg.

BMW has also upped the output of its straight-six turbodiesel. Gains of 13bhp and 20Nm of torque are modest, though it's not as if this engine ever lacked grunt. As evidenced by the less-than-stately 6.1-second 0-62mph time.

It may seem inconceivable that a large saloon with such pace can achieve more than 50mpg, but driven sensibly it gets pretty close. However, the 7 Series remains the keen driver's choice in the luxury segment, so don't be surprised to see lower average economy if you do use that performance.

The 7 Series is a large car, yet it's so agile that it still manages to feel jus as comfortable on quick B roads as it does on the motorway. Select the Sport mode and the damping tautens up, response from the gearbox and accelerator step up a notch and the steering assistance reduces.

That said, even in its default mode the chassis manages to mix comfort and control impressively. It soaks up the worst imperfections as well as any car on the road, yet it's not at the expense of body control, which is undoubtedly best in class.

BMW has tweaked the suspension with new rubber bearings and dampers. Along with self-levelling air suspension for the rear axle, it makes for a more comfortable 7 Series than before. Select Comfort or Comfort+ from the centre-console mounted toggle switch and the ride softens out appreciably.

This should appeal to owners who spend most of their time in the rear of the 7 Series. From there they can marvel at the latest BMW Connected Drive technology, which includes full voice activation for things like writing SMS text messages. There's also a new rear seat entertainment package and 3D mapping for the standard-fit sat-nav system.

Chauffeur companies will be eyeing up the reduced running costs, and there's no doubt that the enhanced comfort is welcome, but we can't help but feel that BMW could have differentiated this car more from its predecessor. Especially as a new Mercedes S-Class is just around the corner.