Cutting-edge hybrid sports car, the BMW i8, meets a high-performance legend in the shape of the Porsche 911 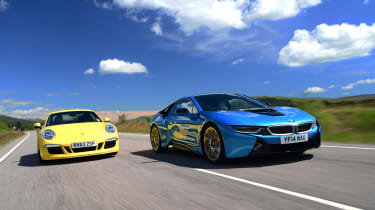 BMW is out to rip up the sports car rulebook with its all-new i8. Featuring jaw-dropping looks and advanced construction, the hi-tech newcomer promises to blend scorching supercar performance with supermini running costs. And its figures certainly make remarkable reading. With 357bhp the i8 is capable of sprinting from 0-60mph in under five seconds, yet it claims nearly 135mpg at the pumps, and boasts emissions of just 49g/km.

Facing the bold new BMW is one of the oldest sports cars on the planet: the Porsche 911. However, while the legendary rear-engined machine has been around for 50 years, the latest seventh-generation model is one of the most complete performance cars ever.

So, can the futuristic BMW topple the perfectly evolved Porsche?

There’s little to choose between our contenders when it comes to practicality. Both feature a similar 2+2 seating layout, although the BMW’s lower roofline means it has less headroom here, while each car’s boot will swallow a couple of bags for a weekend away.

Forward visibility is excellent in both models, but the Porsche is easier to park due to its larger rear windows. That’s no bad thing given parking sensors are £396 extra. 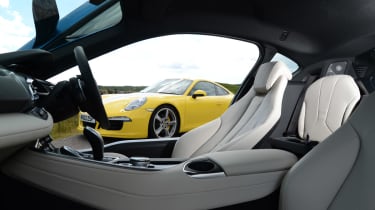 Our 21.5mpg fuel return suggests the 911 will go around 300 miles between fill-ups. Thanks to the i8’s efficient three-cylinder engine, it has a 50-mile longer range, despite the fact its tank takes only 42 litres of fuel. Plug into the mains for three hours or so and the BMW offers an extra 22 miles of all-electric range. 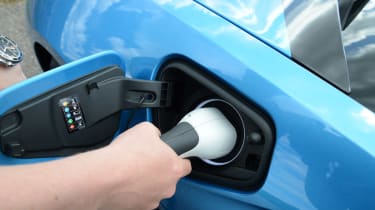 The i8’s jaw-dropping beauty is clearly much more than skin deep. Lift off the car’s sculpted panels and you’ll discover a lightweight but strong carbon fibre-reinforced plastic structure, which is mounted to an aluminium chassis that carries the BMW’s engine, electric motor, lithium-ion batteries and suspension components. All in, the i8 weighs just 1,485kg, which is remarkable, given the amount of heavyweight items it’s carting around.

The innovation extends to the drivetrain, which features a highly tuned 228bhp version of the new 1.5-litre three-cylinder engine that recently debuted in the new MINI. The front axle is driven by an electric motor with its own two-speed gearbox. 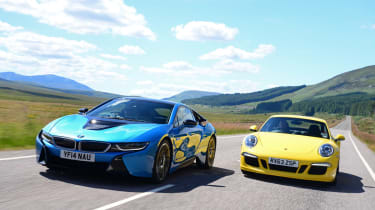 Perhaps the BMW’s greatest party trick is its ability to make the most efficient use of the hybrid motor by linking up to the car’s sat-nav. Plot your destination into the route-finder and the i8 will attempt to calculate the best way to use battery and electric power.

For instance, if there are a number of towns on your journey, the car’s electronic brain will keep enough battery power stored to get you through the urban section in electric mode only. 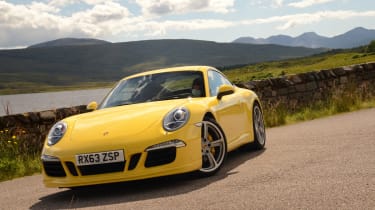 If you’re buying a sports car, then ultimate driving thrills will be at the top of your shopping list – and in this respect the 911 remains unrivalled. With its agile and adjustable handling, strong performance and scintillating soundtrack, the Porsche is one of the most engaging and involving cars money can buy. However, the hi-tech i8 shows that the 911 will have to evolve if it wants to stay on top in the future. 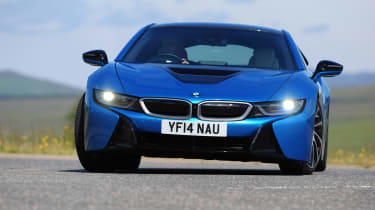 In many respects, the i8 is a watershed moment in sports car history. By blending hi-tech engineering and supermini running costs with supercar pace and show car looks, BMW has redefined what’s possible for a performance car. Yet it lacks the driver engagement that makes you want to take it out just for the hell of it. Don’t underestimate the importance of the BMW, though. One day, all sports cars will be like this.