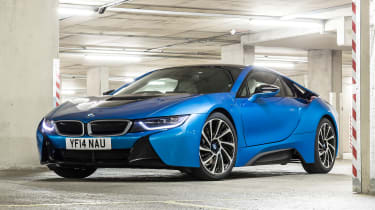 BMW didn’t cut any corners when it was developing the i8, and it’s because of this absolute focus that it has no serious rivals. The engineering that went into its design, the way it drives, the available performance combined with minimal fuel consumption make the i8 an extremely desirable car. Yes, you have to pay relatively heavily for the i8, yet it remains one of the most high-tech cars to ever hit the road. But while the i8 is expensive to buy, running costs are reasonable considering the performance. Also, it’s proving to be reliable, with very few significant faults reported.

BMW has a reputation for building no-compromise cars, but when it unveiled the i8 concept in 2011, there were many who doubted the German brand would really put anything so outlandish into production.

Just three years later, however, we saw the road-ready i8 Coupé, which looked little different from that show car. With its futuristic design, cutting-edge technology and brilliant dynamics, the i8 was typically BMW, but this was a car with economy at its heart.

To that end, much of the available power came from a twin-turbo 1.5-litre three-cylinder petrol engine tuned to give 228bhp. This drove the rear wheels, while the front wheels were powered by a 129bhp electric motor. The result was 357bhp, with CO2 emissions of just 49g/km and official fuel economy of more than 100mpg. Deeply impressive. 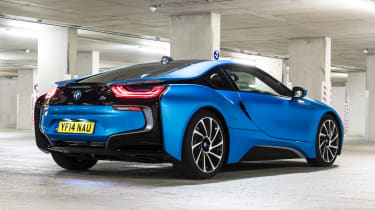 The BMW i8 plug-in hybrid Coupé hit UK roads in July 2014, priced from £94,845 once the £5,000 Government grant had been deducted. There was one specification, with all cars featuring a 20Ah battery pack that allowed an electric range of up to 23 miles. Buyers could order an iWallbox charging system for just £315 (after a 75 per cent Government grant), which could charge the i8 from zero to 80 per cent in only two hours.

All i8s are mechanically the same, aside from any updates already mentioned. Every one features an automatic transmission so it’s just a question of homing in on the best spec for your needs, and whether you want a Coupé or Roadster – bearing in mind the latter carries a significant price premium. 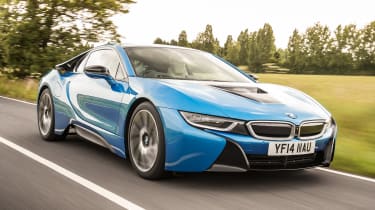 The options list isn’t all that extensive and consists mainly of different colours and finishes, but it’s worth pinning down what extras are fitted to any potential purchase; surround-view cameras and the upgraded Harman Kardon hi-fi are worth having.

Alternatives to the BMW i8

The i8’s closest rival is the Honda NSX, a petrol-electric supercar that costs more than the BMW; prices start at £100,000. The NSX has a twin-turbo V6 engine boosted by three electric motors, but only two seats; if you want more, the Tesla Model S provides plenty of thrills with brilliant packaging, and prices of used examples start at £35,000.

There are also plenty of conventional petrol-engined alternatives, not least the Porsche 911, which is in plentiful supply, brilliantly built and available with a wide variety of body and transmission options. Alternatively you could opt for a Jaguar F-Type, Aston Martin Vantage or Audi R8, all of which come in coupé or convertible forms.

Early i8s can reach speeds of up to 75mph in EV mode and their range is officially 23 miles, but expect 10-15 miles in reality.

An eight-year warranty covers the i8’s battery pack, but so far there have been no reports of one needing to be replaced for any reason.

LED lights come as standard, but considering the car’s price and performance, they don’t light the way as well as one might expect.

You can’t park in very tight spaces because the ‘butterfly’ doors open widely. Park too close to another car and you can’t get in or out. 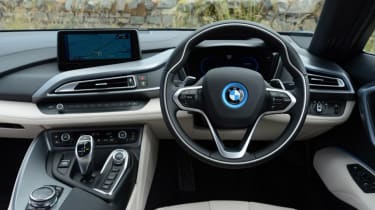 The cabin is beautifully made and superbly designed, but it doesn’t feel as futuristic as you might expect. However, the upside to this is that it’s very easy to live with. There’s seating for four, but it’s very cramped in the second row. You’re better off using this space for carrying luggage – not least because the boot is actually smaller than a Volkswagen up!’s, with a capacity of just 154 litres.

Service intervals for the i8 are every two years or 18,000 miles, alternating between minor and major at £372 and £1,017 respectively. Until early 2018 all i8s came with a five-year maintenance package; it was first cut to three years, then BMW dispensed with it altogether.

Those costs are high, but they’re not outrageous for a car with the i8’s performance. The major service includes new gas struts for the doors (at £145) and a replacement drive belt at £444; this isn’t a timing belt because the engine is chain-driven. The use of long-life coolant means replacement isn’t necessary, while the brake fluid should be renewed every two years for £68. 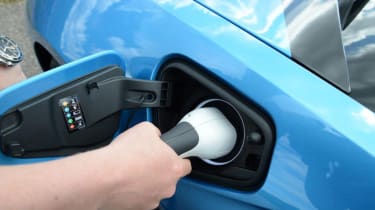 The i8 has had three recalls. Cars built up to September 2014 suffered from potential fuel leaks; a new tank was needed. A power steering sensor issue led to a recall in December 2015; certain i8s built in the preceding two months needed recalibrating. Some i8s built between August and November 2016 have airbags that could fail to deploy correctly; faulty modules were replaced.

The i8 is too niche a vehicle to get into our Driver Power surveys, but BMW’s 25th position out of 30 car makers in our 2019 manufacturers’ survey is very disappointing for a premium marque. Scour the owners’ forums and you’ll find reports of a brilliant driving experience, excellent refinement and a high-quality cabin, with one or two buyers reporting isolated electrical glitches.