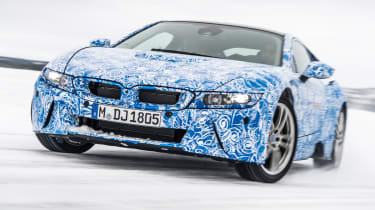 The BMW i3 electric supermini and i8 petrol-electric supercar will hit UK roads within the next 18 months. They’re the first two cars from the new BMW i sub-brand, and we’ve had early access to both models, which are currently enduring cold-weather testing in northern Sweden.

The BMW i3 and i8 offer different driving concepts; while the i3 supermini is a pure electric vehicle designed for urban environments, the i8 is a serious sports car with a plug-in petrol-electric hybrid powertrain.

The i8 is powered by a petrol engine and an electric motor, which drive both axles to give four-wheel drive. The electric motor produces 129bhp and delivers maximum torque of 250Nm to the front axle.

The mid-mounted, turbocharged, 1.5-litre three-cylinder petrol engine delivers an additional 220bhp and 300Nm of torque to the rear axle, giving a total hybrid powertrain output of 349bhp. That should be more than enough to provide the expected BMW driving dynamics: 0-62mph takes 4.6 seconds – exactly the same time as a dual-clutch-equipped BMW M3 – while top speed is limited to 155mph.

What’s even more impressive is the i8’s claimed average fuel economy of 104.6mpg, thanks in part to lightweight construction. The BMW i8 is built from carbon-fibre-reinforced plastic (CFRP), minimising the impact of the lithium-ion batteries’ weight. As a result, the i8 weighs 1,480kg – 195kg less than an M3.

Riding in the i8

The i8’s door swings up, Lamborghini-style, and the interior is familiar BMW style. Most of the switches, knobs and dials look familiar, but the instrument cluster in front of the driver takes the form of a TFT screen. Front passengers sit on well shaped seats, but the rear is only big enough for small children, due to the low roofline.

We’re sitting beside a BMW engineer for this first taste of the i8. He slides the gear selector into D and we’re off. As long as the driver doesn’t accelerate hard, the i8 remains in electric-only mode. So all we hear from the i8’s powertrain is a gentle buzzing noise.

The maximum range in all-electric e-mode is 22 miles, but that’s only if you drive at speeds appropriate to urban driving. Thanks to the electric motor, the i8 offers immediate response at low speed.

But the serious fun starts when the petrol engine kicks in. The i8 accelerates with impressive force, accompanied by a great noise from the engine and turbocharger. Despite the hi-tech powertrain, it feels like a traditional rear-engined, rear-wheel-drive car, such as the Alpine A110.

There’s nothing old-fashioned about the way the i8 handles, though. It felt very agile from the passenger seat, even on the snowy roads of our test. This is down to dynamic stability control, 50:50 weight distribution and how the flow of power to each axle is managed. Switch off the traction control completely, and the rear-drive set-up really comes into its own. And what about on dry tarmac? Our BMW engineer smiles and claims: “Believe me, it’s not easy for an M3 to follow this car.”

How does the BMW i3 compare?

Despite being an urban supermini, the BMW i3 is built from the same lightweight CFRP as the i8, and it has a similar electric motor, too. It drives the rear wheels only and can power the i3 from 0-37mph in 3.9 seconds and 0-62mph in 7.9 seconds.

The i3 has four doors, and the rears are hinged at the back. But like the i8, the driving environment is very familiar. The i3 also boasts an impressive turning circle of less than 10 metres.

BMW claims the i3 can cover around 93 miles on a full charge of its lithium-ion batteries. Charging should take around six hours from a household plug socket. But range and charging time remain a concern for a car that’s likely to cost around £38,000 when it arrives here early next year.

BMW does have an alternative to alleviate range anxiety, though. The i3 will also be available with a petrol range-extending engine – a two-cylinder borrowed from the company’s motorbike division. This will generate electricity and increase the range to nearly 250 miles.