There are five engine options available; all offer punchy performance 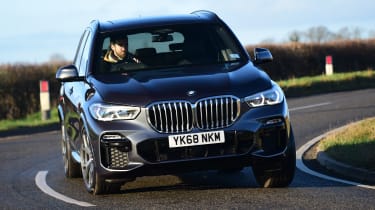 The BMW X5 has always been noted for its road-focused performance, and that remains the case with the latest generation. But BMW has for the first time added an optional Off Road package. This brings four specific loose-surface driving modes, and also some underbody armour to deflect rocks and bumps – although it doesn’t mean the X5 is as good off road as a Range Rover Sport. Still, it should be more than capable enough for most owners.

On the road, the xDrive30d and xDrive40i benefit from standard air suspension to keep things serene and comfortable – especially on the motorway. It’s incredibly quiet and relaxing to drive, and both offer enough punch for fast overtakes should the need arise.

The new xDrive45e plug-in hybrid, while still delivering impressive levels of performance, also has a pure electric range of up to 54 miles - providing improved levels of efficiency and lower emissions.

The sporty M50d is no longer on sale, although its petrol sibling, the M50i, provides huge performance, aggressive styling and is the flagship model within the standard range, short of the X5

All variants feature the same super-smooth eight-speed auto gearbox, and a 4x4 drivetrain that sends more torque to the rear wheels in order to emphasise the sporty driving feel. The resulting experience is not as engaging as in a Porsche 4x4, but offers more reward to the driver than most SUV rivals. There’s a Professional option pack that adds four-wheel steering, although we found this a little inconsistent in its responses, which reduced the driving pleasure. 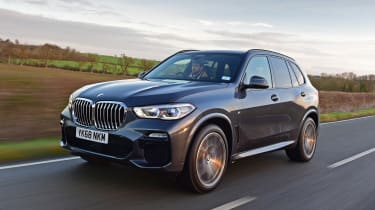 The xDrive30d uses a 3.0-litre straight-six diesel engine with a single turbocharger, delivering 282bhp. It's no slouch, covering 0-62mph in 6.5 seconds and topping out at 143mph.

The standalone X5 M Competition takes things on a stage further, by using the 4.4-litre V8 engine with M TwinPower Turbo tech. This means two turbochargers sit within the V of the engine, helping to produce a mighty 617bhp and 750Nm of torque. The power goes through an eight-speed M Steptronic gearbox, with the M Competition hitting 62mph in just 3.8 seconds.