Roadster gets efficient new four-cylinder turbo, but is it as much fun as other models? 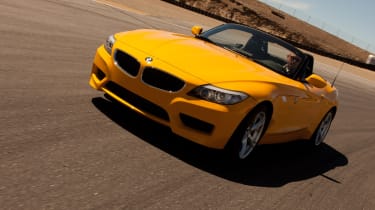 A new four-cylinder turbo has been long overdue for BMW, so it’s got some catching up to do with Audi and Mercedes. As you’d expect, though, this engine is a hit first time – with superb responsiveness and a well engineered exhaust note, it ticks all the right boxes. However, its real trump card is an incredible 20 per cent hike in efficiency compared to its six-cylinder equivalent. Unless you simply must have the range-topping 35i, this is the Z4 to go for.

Luxury and refinement were given high priority on the new BMW Z4 when it was launched in 2009. So is the introduction of a four-cylinder engine a step in the wrong direction for BMW’s roadster?
We got behind the wheel of the new turbocharged Z4 sDrive28i in California, US, to find out.

This new 2.0-litre turbo unit is part of the firm’s shift towards higher efficiency, and effectively offers an alternative to the six-cylinder sDrive30i. It produces 13bhp less than the 30i, with an output of 245bhp. But it promises an improvement in economy of around 20 per cent, and is a tenth of a second faster from 0-62mph, too, with a time of 5.7 seconds.

We’ve already tried this engine in the X1 xDrive28i crossover and were mildly impressed, but had trouble seeing its benefits over any of the diesels. In the Z4, there’s no such confusion. A petrol powerplant makes much more sense in the sports car, while the unit bisects the six-cylinder 23i and 35i models perfectly.
We drove the M Sport variant with a six-speed manual gearbox (an eight-speed auto is an option). It gets 18-inch wheels and a two-tone Alcantara interior with sports seats. There’s also the suite of Drive Dynamic Control settings – including Comfort, Normal, and Sport+ – which calibrates the response of the throttle, suspension and steering.
The secrets to the 2.0-litre unit’s impressive performance are an efficient twin-scroll turbocharger and BMW’s Valvetronic system, which minimises power losses under throttle.
As a result, the car gets a much flatter and extended power curve, and significantly greater torque from much lower engine revs. Combine that with the lighter kerbweight, a larger percentage of which is over the rear axle, and the handling is significantly upgraded.
Our model was fitted with 18-inch wheels – a set of 19-inch rims is optional – and they help to soften the ride slightly. But it will still be too harsh for some, no matter which chassis setting you choose. However, on the right road, the classic BMW balance shines through, and the car flows from corner to corner.
A wide power band, from around 1,500-5,000rpm, prevents you from having to change gear too often, and despite being turbocharged, throttle response is crisp.
The exhaust noise in the X1 xDrive28i didn’t do much for us, sounding a bit thin and timid compared to the six-cylinder car.
But for the Z4, BMW has included an electronic sound generator, which augments the bass and baritone at idle and in the sweet spot between 2,500-3,500rpm. OK, so this four-cylinder version doesn’t provide the smoothness or audible thrills of the six-cylinder sDrive30i, but as the efficiency gains are so impressive, it’s an acceptable compromise.
For us, the manual version is cheaper and more engaging, plus it covers 0-62mph two-tenths of a second quicker than models with the eight-speed automatic.