We drive Cadillac's new XT5 SUV, but should we be happy or disappointed that it's not coming to the UK? 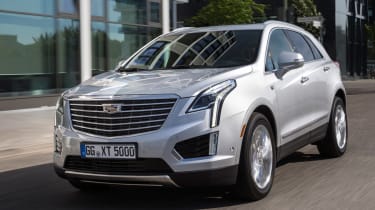 Cadillac doesn’t offer the XT5 in the UK, and it’s easy to see why. The powertrain, ride comfort, handling and interior quality aren’t on a par with rival SUVs that are sold here, plus there’s no diesel option either. It has a long kit list on its side, as well as the exclusivity factor, but neither can make up for this car’s fundamental problems.

As part of a plan to revamp the Cadillac brand around the world, parent company GM is investing $12billion into a raft of new models, including this new XT5 SUV. It’s not available in the UK, unlike the CT6 saloon we also tried recently, but it will go on sale in Europe.

It’s around the same size as a BMW X5, although the huge grille and slab-sided styling make it look even bigger. It’s a unique design, and will probably appeal around the globe, but it’s hard to see many buyers preferring it to the handsome set of rivals on offer here in Europe. 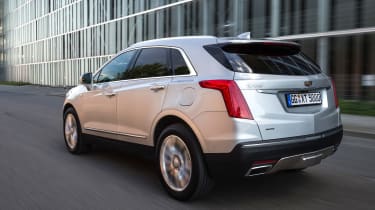 It’s the same story on the inside in terms of styling, with the design lacking the flair and premium touches we’ve come to expect from top SUVs in this class. There are a few high-quality materials that look good, but search around and there are also scratchy and cheap-feeling plastics that bring the ambience down. The design of the switchgear is inelegant, too.

Where the inside doesn’t match the outside is the space - although the car looks bigger than it is, the interior feels surprisingly cramped. There’s not enough headroom in the back, and front-seat passengers will need to move their seats forward to accommodate adults in the rear.

Cadillac has fitted an all-new naturally-aspirated 3.6-litre V6, which develops 310bhp and 368Nm of torque. Despite being a new engine it feels very old-fashioned, revving out slowly and with a harsh exhaust note - unlike the turbocharged 3.0-litre V6 in the CTS and CT6 saloons, which is a characterful unit.

Economy is poor too, especially as the performance from such a large displacement engine is disappointing. Despite having 310bhp and only managing 28.2mpg, the car goes from 0-62mph in 7.5 seconds, which is unremarkable by today’s standards. Performance in-gear is lacking, so it’s only the four-wheel drive system’s extra grip that helps it in that sprint.

The engine is a disappointment, but the 8-speed automatic is even more of a blight on the XT5’s driver involvement. It’s slow to respond, can’t decide on the right gear, and holds on to revs for far too long after you’ve stopped accelerating. Even the shifter is clunky and frustrating to use, though the paddles on the wheel for manual mode are better than the flappy plastic ones in the CT6 saloon. 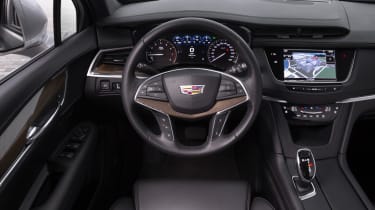 The XT5 also manages to feel too firm, even on our test route in Germany, while still rolling a lot in corners. The steering is decent, with good weighting, but the loose body control means the XT5 isn’t fun to drive quickly, and is actually uncomfortable at medium speeds.

The ride is particularly harsh from the passenger seat, and our test car had a few rattles thanks to the vibration coming into the cabin. The low-speed ride through town isn’t as bad, but the lurching gearbox and noisy engine mean it hardly glides around city streets either.